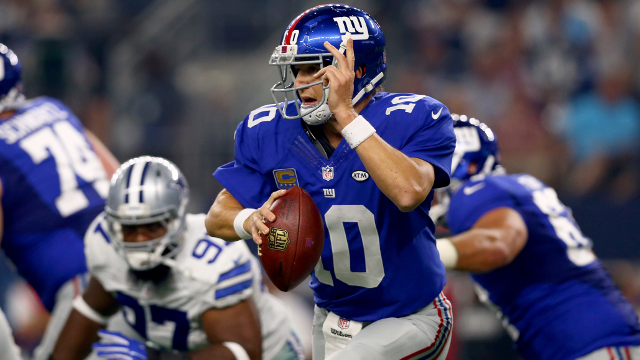 The Giants-Cowboys NFC East showdown felt like Week 1’s match-up all over again, with the script completely flipped.

When Tony Romo led a miraculous 90-second drive to secure the Cowboys win (in Week 1), much of the talk was about how poorly Dallas played to still come out with the victory. Now, in Week 7’s game, many are left wondering how the Giants escaped after such a poor performance.

Following a humiliating defeat at the hands of the Philadelphia Eagles on national television last week, many expected the Giants to come out firing in this pivotal game. But putting up zero points in the first quarter and trailing 13-10 at halftime isn’t exactly what many people had in mind.

Of course, this poor performance is even more embarrassing when accounting for the fact that they were facing a Matt Cassel-led squad. The Giants defense couldn’t stop Darren McFadden – a sentence that hasn’t been uttered since the running back was at the University of Arkansas – and New York’s best player was some guy named Orleans Darkwa.

Even in the second half, it wasn’t like the Giants came out all fired up and took over the game. Instead, they were able to sit back and let Dallas’ mishaps lead them to a 27-20 victory.

Dallas had 460 total yards of offense versus New York’s 289 yards, but they turned the ball over too often. Three Matt Cassel interceptions (one of which was returned for a touchdown) and terrible special teams coverage by Dallas allowed the Giants to scrap out a win.

With the Giants and Cowboys each getting an undeserved win against the other this year, it’s still unclear who the stronger team is. But based on yesterday’s performance, ‘strong’ shouldn’t be a word associated with either NFC East squad.