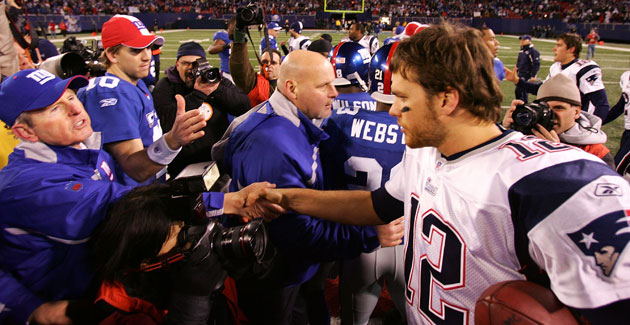 As has been the case for much of the season, I underestimated the Carolina Panthers. Beating the Green Bay Packers despite a disastrous fourth quarter, the Panthers have asserted themselves as Super Bowl contenders. We also saw the Indianapolis Colts’ full potential on display, as they were able to hand the Denver Broncos their first loss of the season.

Week 9 also offered three overtime games, a broken tablet, a 284-yard receiving performance and a Blaine Gabbert win. It will be hard for Week 10 to top the excitement/madness, but let’s take a look at five of the most intriguing games.

After two brutal losses against the top two defenses in the NFL, the Packers get the rare treat of facing a horrendous Detroit Lions squad. This game has the feel of one where Green Bay will unload all of its frustrations from their two game losing streak on their helpless opponent. James Starks is now Green Bay’s official No. 1 running back, and will carve up Detroit’s Ndamukong Suh-less defensive line. Aaron Rodgers will throw four touchdown passes, Matthew Stafford will get sacked five times, and head coach Jim Caldwell will be fired following the loss. The Panthers are feeling good after their 37-29 win over the Green Bay Packers, but are in for a tougher test than most realize this week. Marcus Mariota and the Tennessee Titans snagged an impressive road win over the New Orleans Saints last week, and are starting to find their groove on offense. The rush defense is still a work in progress, but the unit looked much better in interim head coach Mike Mularkey’s debut. The Titans’ pass defense only allows 217.5 passing yards per game, meaning Cam Newton will have to be precise with his passes and establish a strong rushing attack if the Panthers are to remain undefeated. Newton will make just enough plays to win, but the Titans will give Carolina all they can handle. I feel like a fool. This will now be the third consecutive time these teams meet where I can’t figure out a scenario in which the Giants win. The Patriots look destined to finish the season 19-0, with Brady waving his middle finger at Goodell through the whole process. While Eli Manning and Tom Coughlin have obviously had Brady’s number, I think that trend ends this week. The Giants barely got by Tampa Bay last week, and essentially have zero chance of slowing down Brady. Unless the Giants get pressure on Brady, re-sign Plaxico Burress and make some David Tyree-like catches, they won’t keep this one within reach.

If you want to see a high scoring game, don’t turn this one on. These two teams play similar styles of physical football on the defensive end, but differ tremendously on offense. The Seahawks like to rely on their ground game, while the Cardinals like to beat defenses by throwing the ball. It’ll be strength vs. strength, as the Cardinals have the No. 4 rush defense, and Seattle vaunts the No. 2 pass defense. With both offenses likely to struggle, I expect it to remain close throughout. It won’t be pretty, but Russell Wilson will do just enough to get his Seahawks to 5-4. The Houston Texans don’t look like the team that will be handing the Bengals their first loss of the season. However, the Texans have had an extra week to prepare for this game, and should be competitive as double digit underdogs. The Bengals won by a double digit margin for the fourth time this season last week against the Cleveland Browns. Following Cincinnati’s first three double digit victories, they won their next game by single digits. I expect that trend to continue this week.