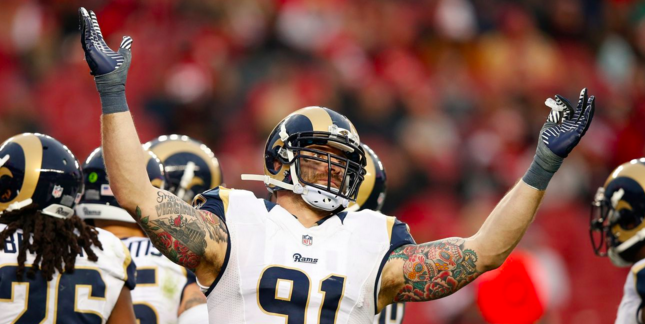 No NFL franchise has had a more transformative offseason than the Rams. Relocating back to Los Angeles after 21 seasons in St. Louis, the Rams hope the financial boost can extend to the on-field product as well.

Having extended their record to 11 straight seasons without a winning record following this year’s 7-9 showing, the Rams are hoping a drastic change in personnel can reverse this trend. This overhaul began on Friday with the decision to release veterans James Laurinaitis, Chris Long and Jared Cook.

Laurinaitis has played all seven years of his NFL career with the Rams, totaling at least 100 tackles in every season. With 852 total tackles, the former Ohio State Buckeye is the all-time leader in Rams franchise history.

Long spent eight seasons with the Rams, and tallied 24.5 sacks over a two-year span from 2011-2012. However, injuries slowed down the son of Hall of Famer Howie Long over the past two years, limiting him to a total of 18 games.

While neither player was able to help lead the Rams to the postseason, head coach Jeff Fisher expressed his immense gratitude to both men:

“They’ve been the pillars of our defense for many years and not enough can be said of their love for the game and for their teammates. Beyond the field, they took pride in mentoring the younger players and doing their part to make a real difference in the St. Louis community. We will always be grateful for James and Chris’ unselfish commitment to the Rams and wish them the best moving forward.”

The Rams are expected to use the $24 million in cap space created by releasing Laurinaitis, Long and Cook to re-sign some of their key in-house free agents. But unless the Rams can bring in more talent (and a quarterback) from this year’s deep free agency pool, their dreaded streak of under .500 football will extend to 12 consecutive years.