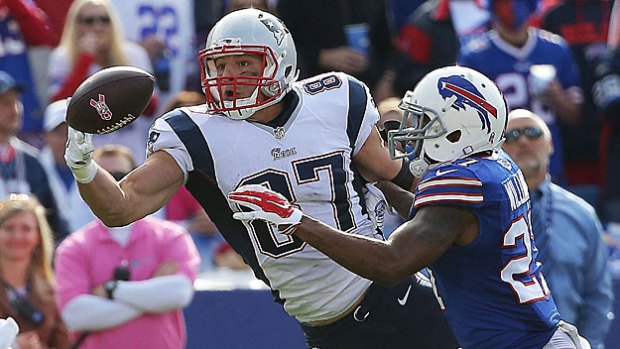 So much for Rex Ryan and the Buffalo Bills becoming the first team in NFL history to go undefeated during the regular season en route to a Super Bowl championship. Only falling 18 games short, you get the idea that the Bills were somehow shocked to lose 40-32 to a New England Patriots team that is now 27-4 against Buffalo since 2000.

Coming off a 27-14 win over the Indianapolis Colts in which the Bills looked like an impenetrable defense, the New England Patriots flat-out embarrassed them. Tom Brady threw for 466 yards and three touchdowns, and Rob Gronkowski had seven catches for 113 yards and one touchdown. It must’ve been hard for Coach Bill Belichick to avoid laughing during the post-game press conference.

After hearing how great Buffalo is all week, and how prepared they were for this game, Belichick devised a brilliant game-plan that the Bills had no answer for. Perhaps that’s part of the fun though, as New England’s head coach is never one to gloat or talk a big game. Instead, he makes snide remarks and does things like go for it on 4th & 1 from his own 48 in the second quarter while leading by two touchdowns.

The Patriots failed to pick up the first down, but it has become so routine that it isn’t even discussed afterward. Besides, it wasn’t about the play call, but the message he was sending to the Bills’ coach. The message was simple: no matter how much confidence Ryan exudes, Belichick will always own him.

It is now at the point where Belichick-Ryan isn’t even a rivalry, because that would suggest it is an even match. Unfortunately, history suggests otherwise.

Sadly for Rex Ryan, the day Tom Brady and Bill Belichick retire from the NFL will be the day he has any chance of leading his team to a Super Bowl.