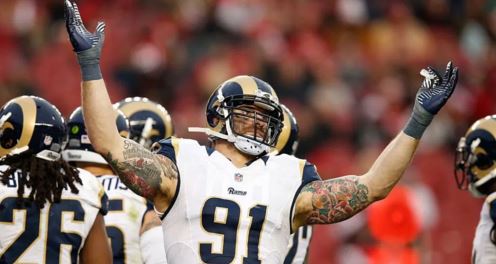 The New England Patriots shocked many with their decision to trade pass rusher Chandler Jones to the Arizona Cardinals, but have already found a suitable replacement. Defensive end was already a deep position for New England, but they added even more stability at the position with the acquisition of Chris Long.

Son of Hall of Famer Howie Long, Chris spent the first eight years of his career with the St. Louis (now Los Angeles) Rams. In his time there, he amassed 206 tackles and 54.5 sacks, with his best years taking place from 2010-2013.

Unfortunately for Long, injuries over the past few seasons have prevented him from being effective. And with the Rams already having plenty of young talent on the defensive line, the franchise’s longest tenured player suddenly became dispensable.

Now, Long will join the title contending Patriots and play alongside Rob Ninkovich, Jabaal Sheard, Geneo Grissom and Trey Flowers. New England has always prioritized having a strong pass rush, and with five capable contributors, they should be more than able to fill Jones’ void.

Long was also in negotiations with the Atlanta Falcons and Washington Redskins, but ultimately decided to sign with New England on a one-year, $2 million deal. In Long’s eight seasons as a member of the Rams, the team never finished with a record better than 7-8-1, and failed to reach the postseason every year.

Luckily for Long, as a member of New England, his postseason-less streak (most likely) won’t be extending to nine years.