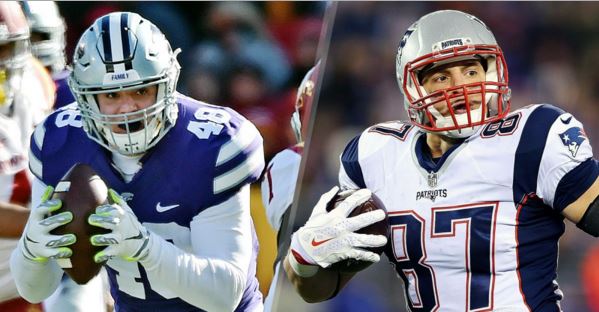 Every football fan knows the name Rob Gronkowski, but a little known fact is that the Gronkowski family is a breeding ground of ridiculous athletes. With Kansas State fullback Glenn Gronkowski now heading to the NFL, there’s a very real chance that two Gronkowski’s suit up for the New England Patriots next season.

The split tight end revealed at the Senior Bowl that he is set to meet with New England this week. This season, the youngest Gronkowski was limited in the stat sheet – rushing 11 times for 45 yards and hauling in 5 catches for 76 yards. However, his blocking was essential in the Wildcats’ offensive system.

Glenn doesn’t care about the numbers though, and is excited for the opportunity to play in the NFL with or against his big brother – the most dominant tight end in the league. The K-State fullback acknowledged how special it would be to play with Rob.

“That would be awesome,” he said. “I’ve actually never played with any of my brothers before. They’ve always been too old for me…Everyone else has played together, so to be on the same team, that would be a dream come true.”

Glenn would be the fourth Gronkowski to play in the NFL. Aside from Rob, the Gronk family has seen Dan and Chris make their way into the league as well. While neither of them matched Rob’s production, Dan and Chris combined to play 56 games and each played for four different teams.

Knowing Bill Belichick and the way he makes hidden commodities fit his schemes, it wouldn’t be surprising to see the Patriots draft another member of the family.

If that happens, watch out – stopping one Gronkowski has already proven to be an impossible task. There’s no telling what would happen if two were on the field at the same time.