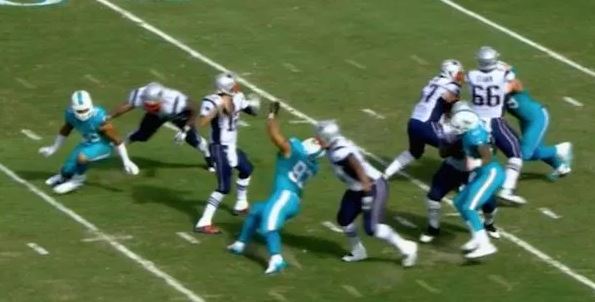 With 8:10 left in the second quarter of the Patriots’ eventual 20-10 loss to the Miami Dolphins, New England fans held their collective breath as Tom Brady fell to the ground. Hit on the play by Dolphins defensive tackle Ndamukong Suh, Brady’s ankles got caught under the 307 lb. man’s body.

At first glance, it seemed as if New England’s season had come to a devastating end.

Brady was slow to stand up and needed to have his ankle taped heavily, but he managed to finish the game. Afterwards, the future Hall of Famer was walking with a noticeable limp, and told reporters he was “pretty sore.”

New England’s worst fears of broken/fractured bones were quickly put to rest, as an MRI revealed Brady’s ankle was merely sprained. Even better for the Patriots, finishing as the AFC’s No. 2 seed means they will get an extra week of rest before hosting a Divisional Round playoff game.

With Brady having plenty of time to rehab his ankle and the expected return of wide receiver Julian Edelman, the Patriots are getting healthy just in time for the postseason.

Of course, “healthy” is an arbitrary word for a New England squad who has been absolutely decimated by injuries all season. Having already lost key contributors LeGarrette Blount, Dion Lewis, Nate Solder, Aaron Dobson and Dominique Easley to season-ending injuries, the Patriots are just hoping to keep the rest of their team intact.

That starts with Brady, who appears to be the only member of Bill Belichick’s squad lacking a serviceable replacement. Luckily for Belichick and the Patriots, they won’t have to worry about their star quarterback missing time, and appear ready to make a serious run at their second consecutive Lombardi Trophy.