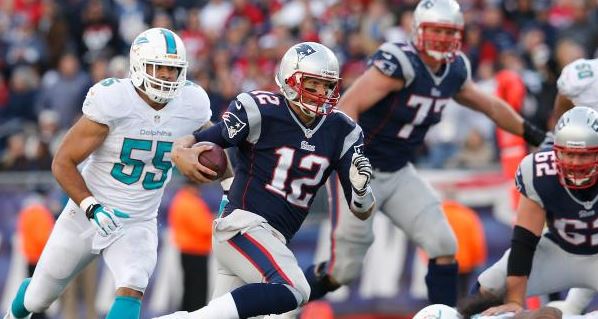 The undefeated New England Patriots (6-0) take on the Miami Dolphins (3-3) this Thursday night. While the Pats have been flawless this season, the Dolphins have been all over the place. However, since Dan Campbell took over for Joe Philbin (who must feel like the worst coach in NFL history), the team has played exceptionally. Coming off a dismantling of the lowly Houston Texans last week, Miami finally appears to be living up to many people’s high expectations.

Meanwhile, New England is looking pristine. Tom Brady is arguably playing the best football of his career, and is coming off a week in which he led his team in rushing. No team has figured out how to slow down this offense, but Ndamukong Suh and company will be the next to take a crack at it.

Here are the players to watch during Thursday Night Football:

Tom Brady – Quarterback
He’s got a massive chip on his shoulder, and has never lost a game on Thursdays (8-0).

Rob Gronkowski – Tight End
He’s the best tight end in the league playing with the best quarterback. He had three touchdowns in his last Thursday night game and he owns the Dolphins.

Julian Edelman – Wide Receiver
The Slotty Pippen to the Patriots’ Michael Jordan (Tom Brady) is having another fantastic season. The former quarterback has 26 catches for 322 yards and two touchdowns in his last three games against Miami. Expect that trend to continue this week.

Dan Campbell – Head Coach
This is his first major test as the head coach of the team. He has looked great in his first two weeks, but the opposing head coach (Bill Belichick) is an absolute mastermind. It’ll be interesting to see what he tries to pull in this match-up.

Ryan Tannehill – Quarterback
He was almost perfect against the Texans, going 18-19 for 282 yards and four scores. If he wants to beat the Pats, Tannehill is going to have to put up similar numbers. It’ll be tough, but it’s doable for the Texas A&M product.

Lamar Miller – Running Back
He was quite the stud in Week 7 against the Houston Texans. Miller had a 54-yard touchdown catch and a 85-yard touchdown run. He needs to keep his hot streak going if the Dolphins are to steal a road victory against New England.