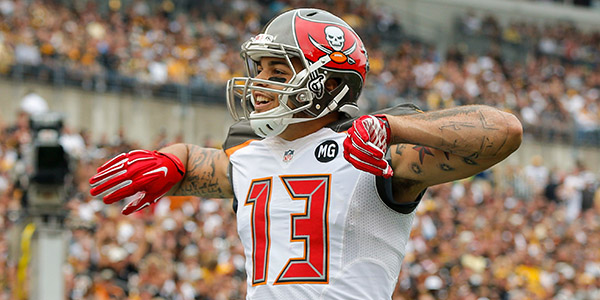 As Jameis Winston finds his footing, Mike Evans continues to display freakish athleticism and an uncanny ability to drop passes. Winston is Tampa Bay’s quarterback of the future, and he’s already figured out how to utilize his best receiving option.

While at Texas A&M, Evans established himself as an athletic specimen by taking advantage of his abnormal length. His stats this season indicate that he’s still improving every game, despite dropping an unusual amount of routine catches. Those would seem to be a result of either too many targets or a lack of focus, but his coach already laughed off the notion that Evans will form a habit of dropping the football.

Most receivers with a basketball background thrive in a football setting because the two sports require many of the same athletic traits. Evans is a perfect example of a guy who might have been too small for basketball, but he literally towers over every defender that gets in his way. Winston has been wise to feed Big Mike with a large dose of passes, which helped their chemistry flourish in such a short amount of time.

This week, the Bucs travel to Philly to take on a depleted and hopeless Eagles team. They have a new quarterback, their offensive weapons can’t stay healthy, and their coach might have already agreed to a contract in Southern California (in USC’s dreams). All of this could add up to a strong showing for Evans and Tampa Bay, as they have actually played quality football recently.

If Evans remembers the basic concepts of being a wide receiver, there’s a good chance that he leads the league in total yards and catches this week. A Buccaneers team without Vincent Jackson and Austin Seferian-Jenkins this week makes Evans a Week 11 fantasy football game-changer.