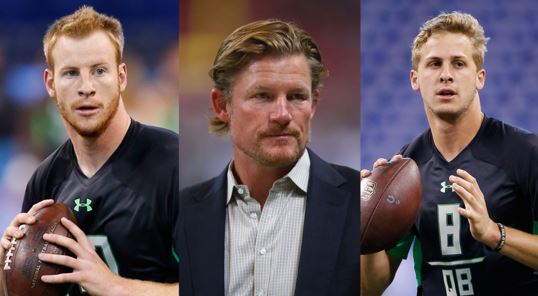 A new city apparently means a new mindset for the now-Los Angeles Rams. Only months removed from relocating to the city of angels, the franchise has made an all-in move by trading for the No. 1 pick in this year’s draft.

It’s a move eerily similar to the one Los Angeles was on the opposite end of in 2012, when Washington sent the Rams a huge package of picks for the No. 2 selection. However, the Rams hope their swap ends up being more successful, as the ‘Skins used the pick to select quarterback Robert Griffin III – a player who had a tumultuous 4-year career in Washington and was subsequently released by the team this offseason.

The move makes sense for both sides, as the Rams have the chance to select a franchise quarterback while Tennessee aims to put more talent around theirs. Marcus Mariota already showed immense potential last season, and with six picks in the first three rounds of this year’s draft, Tennessee has the perfect opportunity to improve their team.

For the Rams, they haven’t had a winning record or made the postseason since 2004, and likely weren’t going to break that streak behind Case Keenum or Nick Foles this season. But with a young and elite defense in place, the Rams recognized that they are a strong quarterback away from being a legitimate contender in today’s league.

With the first overall pick now, the Rams get to decide whether Carson Wentz or Jared Goff gives their franchise the best chance to be successful. Rumors say the Rams are currently leaning toward Goff – the gunslinger out of Cal – but with two weeks until the draft, the Rams will certainly do their due diligence.

Only time will tell whether the trade turned out to be wise, but Rams fans have to come away happy knowing the franchise won’t be settling for mediocrity any longer.