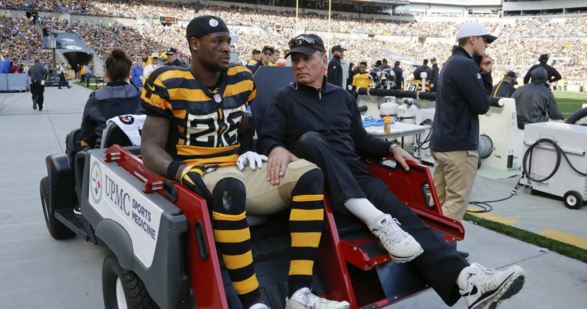 People will try to tell you it’s okay. They will say the waiver wire can help you get through this and that your season isn’t over. Let me tell you right now, they are lying.

I don’t care how many times I’ve heard announcers say “it really looks like DeAngelo Williams has regained his burst,” or “talk about a career renaissance by the former Carolina Panther,” he’s not Le’Veon Bell. And that’s the problem – no one can fill Bell’s void.

Unless you already have Devonta Freeman and Todd Gurley on your roster (kudos to you if that’s the case), it’s time to look ahead to next season. You can head to the corner of the room and begin sulking with those who drafted Jamaal Charles in the first round.

Of course, Bell’s injury transcends fantasy football. While we like to convince ourselves that we fantasy football participants are the focal point of the National Football League, it’s a brutal day for the Pittsburgh Steelers. There was growing optimism that this talented team was ready to compete for a Super Bowl.

Pittsburgh’s prolific offense was expected to do much of the heavy lifting in achieving these Super Bowl aspirations, but suspensions and injuries prevented us from seeing them at full strength. Ben Roethlisberger, Le’Veon Bell, Antonio Brown and Martavis Bryant played a total of 18 snaps together, leaving Steelers Nation wondering what might’ve been this season.

Bell’s torn right MCL will cost him the rest of this season, and sadly, injury concerns will now hover over the 23-year-old for the rest of his career. As scary as that is for fantasy football owners when next draft season rolls around, it’s way more horrifying for the Pittsburgh Steelers.