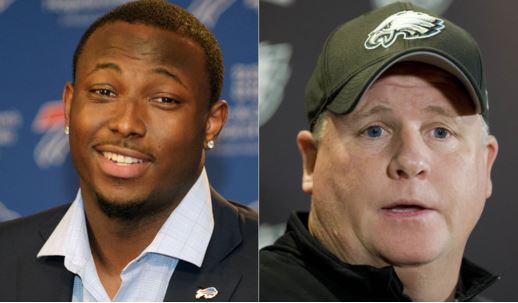 LeSean McCoy doesn’t like Chip Kelly, and has never minced words when discussing his former coach with the media. After claiming Kelly “got rid of all the black players” earlier this season, McCoy not only stood by his comments, but took it a step further this week. Telling the media he won’t be speaking to Kelly after the game, McCoy seems a bit more focused on the post-game handshakes than the game itself. With both teams competing for playoff spots in their respective conferences, this middle school-like spat is overshadowing what promises to be a very competitive game. The Eagles are coming off a crucial win over the New England Patriots, and the Bills will be trying to win back-to-back games for just the second time this season.

McCoy will obviously be looking to obliterate his former squad, while Kelly will make it his chief mission to contain Buffalo’s star running back. But as has become too typical this season, the drama doesn’t stop there for Kelly. After only giving DeMarco Murray (McCoy’s replacement) eight carries in last week’s victory, Kelly is also dealing with the ire of his No. 1 running back. The Bills’ running back and Kelly certainly won’t be shaking hands after the game, but McCoy and Murray will have plenty to talk about.