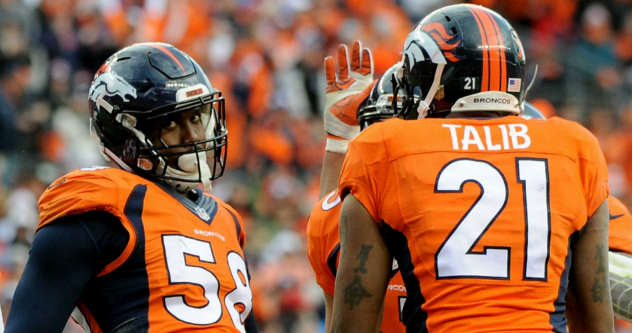 When the Super Bowl Champion Denver Broncos traveled to the White House on Monday, a key contributor was unable to attend. Lockdown cornerback Aqib Talib missed out on the once-in-a-lifetime opportunity in order to recuperate from a gunshot wound he suffered a few days earlier.

The 30-year old defensive back was one of three people shot at the Vlive Club in Dallas, Texas. Fortunately, Talib was shot in the leg and his wounds aren’t considered life threatening — he was released from Dallas’ Medical City Hospital on Monday morning.

The former first-round pick for Kansas was reportedly too drunk to remember who shot him. “Everything was a blur and I was too intoxicated to remember what happened,” Talib told Dallas police.

Luckily for Talib and the Broncos, the Ohio native only required a few stitches and is expected to make a full recovery.

It’s a good bit of luck for the Denver defense, as Talib totaled 45 combined tackles, 3 interceptions and 2 touchdowns last season.

In the past, Talib has had his fair share of off-field issues, which include a simple battery charge in 2009 and an aggravated assault charge in 2011. However, if Talib wants to keep the $8.5 million base salary he is owed in 2016, it would be wise for the cornerback to stay out of trouble.