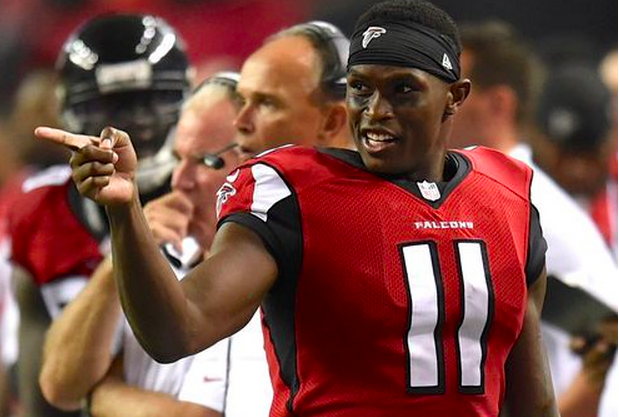 After five seasons in Atlanta, Julio ‘Quintorris Lopez’ Jones is well on his way to becoming the best receiver in franchise history.

The Falcons haven’t had many notable pass catchers over the years, but Jones is clearly the most talented. Currently in his fifth season, Jones is only 2,000 receiving yards behind Terance Mathis for second place on the all-time list. Co-starting wide receiver Roddy White is the franchise’s record holder, with 10,449 career yards.

With $47 million in guaranteed money from his new contract extension, Julio should be in red and black for the prime of his playing career. In his first four games with current offensive coordinator Kyle Shanahan, all Julio has done is catch 38 passes for 478 yards and four touchdowns. On pace for one of the greatest seasons by a wide receiver in NFL history, Julio’s rare blend of size, speed and precise route-running has him in the discussion of best wide receiver in the league.

Let’s play a quick little game looking at the top three receivers from the 2011 draft class:

Any guesses on who’s who? I’ll give you a hint: A.J. Green is player A.

And Torrey Smith is player…C.

When you look a little closer at these numbers, you see that Jones (Player B) actually has the highest yards per game. Despite missing most of 2013 due to injury, he’s only 500 yards behind Green, who was selected two spots ahead of Julio in the 2011 draft.

The Falcons gave up a lot to trade for their star receiver, but it certainly seems to have been worth the steep price. Anyone who noticed it was the Browns who traded this pick to Atlanta could’ve immediately predicted Jones would be special. Based on Cleveland’s luck, Jones was blessed with a nearly guaranteed Hall of Fame career.

Helping lead the Falcons to a 4-0 start, Julio has become completely match-up proof in fantasy football. However, this week’s match-up against a depleted Washington Redskins secondary has Quintorris Lopez fantasy owners licking their chops even more than usual.

It seems the only way to stop Julio is to do what the Texans did last week – get down by so many points that the Falcons elect to take him out to avoid injury. But assuming teams will elect to be competitive against the Falcons, Julio will play all four quarters and prove why he is the best wide receiver in football.