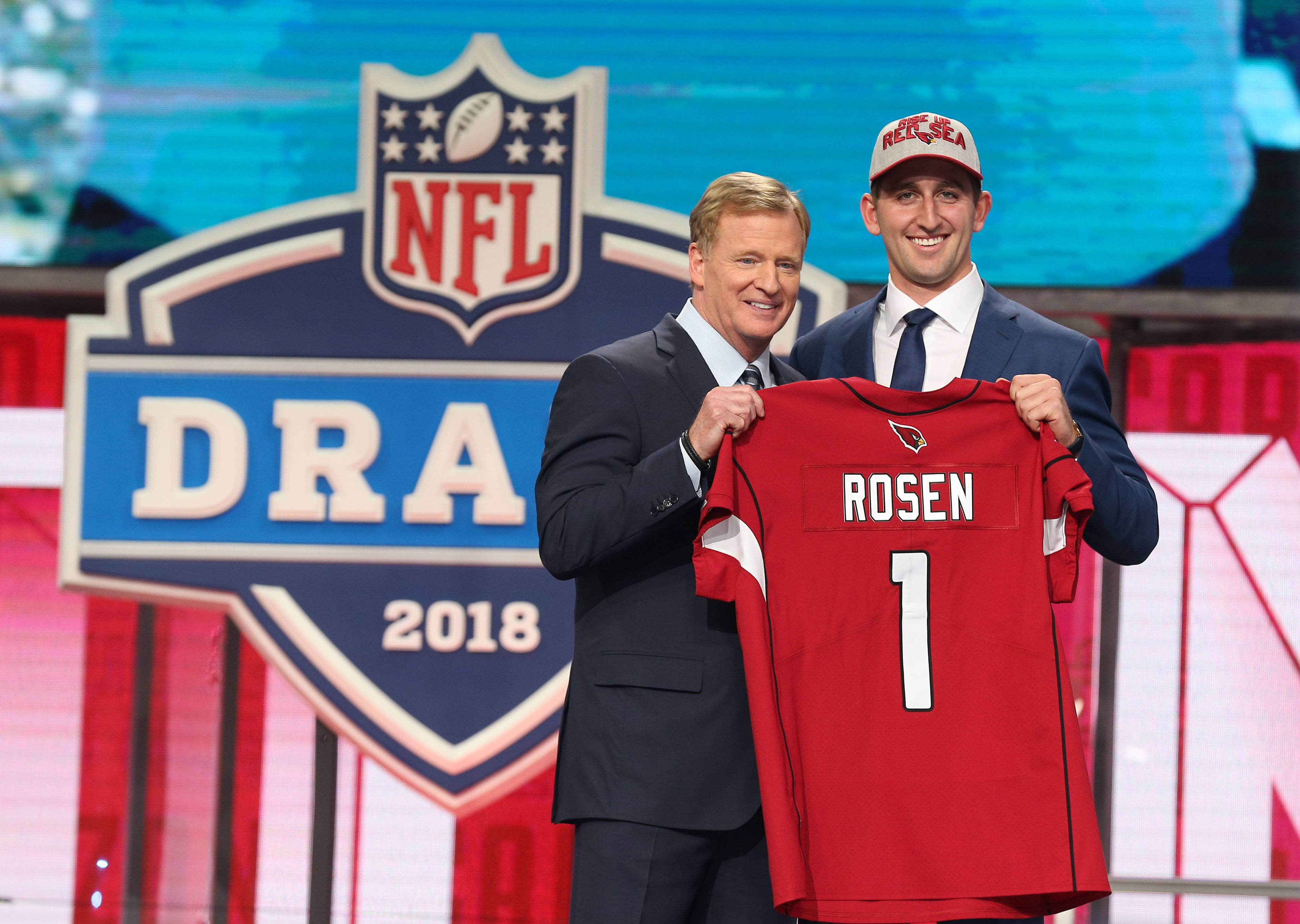 The first round of the 2018 NFL Draft proved to have no shortage of drama. Four quarterbacks went in the top-10, and a multitude of trades created some intriguing storylines.

Many were captivated by the evolving quarterback carousel. No one quite knew the order in which these talented signal-callers would come off the board. Baker Mayfield ended up going No. 1 Overall to Cleveland — followed by Sam Darnold (No. 3) and Josh Allen (No. 7). Josh Rosen sat (aka steamed) in the green room as he waited to hear his name called.

The Arizona Cardinals ultimately traded up and snagged the talented gunslinger from UCLA with the 10th Overall pick. Rosen smiled into the camera as he posed for a picture with Roger Goodell. At this point, many would assume the introductory interview to be chock-full of cliches and humble commentary.

However, this wasn’t the playbook Rosen followed. For this reason — and other reasons — Rosen will prove to be the best quarterback from this class.

The NFL is a complicated business. As such, the face of a franchise essentially must check off multiple boxes neatly crafted by the ownership group. These boxes are primarily pandering to the fan base. Having an ultra-irregular face of the franchise could lead to a loss of fan support — which in turn may lead to a loss of money.

Let’s first speak to Rosen’s perceived weaknesses as a player. Long-term durability has come into question — largely based upon a shoulder injury and a history of concussions. Secondly, Rosen isn’t known as the most mobile of quarterbacks. When pressured, he certainly doesn’t resemble Lamar Jackson in terms of making plays with his feet. Third and perhaps most significant, Rosen has garnered a perception of not caring too much about the game of football.

Unequivocally, this characterization is unfair.

Playing NFL QB requires extreme mental & physical toughness and I’m not sure Josh Rosen has those. Throws a pretty ball. But does he have the intangibles and strength of leadership to take over a team? I have my doubts.

Nicknamed “Chosen Rosen” during his high school days, the quarterback comes from a very affluent background. His father is a world renowned surgeon (who almost became President Obama’s surgeon general). His mother’s family includes the CEO of famed publishing house J.B. Lippincott and Co., and the founder of the Wharton School of Business. Both parents were also national gold medalist-winning ice dancers.

Rosen grew up in the affluent Los Angeles beach town of Manhattan Beach. He went to a “preppy” school for college (UCLA). Rosen had a hot tub in his dorm room, a devoted interest towards Elon Musk, and even has dreams of being an entrepreneur one day.

In other words, he doesn’t “fit” the stereotype of the impoverished kid scratching and clawing his way towards becoming an NFL player. Rosen likely isn’t motivated as much by the unabated goal of making money when compared to some of his peers.

The biggest elephant in the room comes in terms of Rosen’s character. A confident and highly brilliant mind, Rosen is not afraid to speak his mind on any topics — let alone controversial ones. In a league with plenty of fans on the right side of American politics, Rosen likely didn’t do himself any favors when golfing on a Donald Trump golf course with a not-so-nice message for the president.

Coupled with a brash personality, it’s easy to see why Rosen could be disliked by both NFL personnel and his peers.

With all of that said, it’s unfair to peg a player as being “difficult to manage” or “not dedicated to the game” when the said player comes from money — or exercises the right to freely speak their mind.

The NFL culture dictates the perfect quarterback prospect as being robotic in nature with a “Yes, sir” demeanor. While respectful, this isn’t Rosen. Teams likely focused on these machinated knocks against Rosen rather than the talent on the field. As such, this could end up biting all the teams that bypassed on selecting him.

That’s my Quarterback ❗❗❗ayyyeee J.R ain’t a blessing, you made it here after all that happened @josh3rosen https://t.co/clmOPbe6GW

Rosen’s intelligence as an individual translates rather well to the field. A true student of the game, he can digest the most dense of playbooks. Rosen knows all the progressions, and often always makes the best reads.

His ability as a thrower also cannot be questioned. When compared to Mayfield, Allen, and Darnold, there’s no doubt that Rosen has the best mechanics of the four. He throws a very catchable ball with above-average velocity. Rosen also has the combination of touch and arm strength to make every throw on the field — including ones that vertically challenge defenses.

Some may point to his overall record at UCLA being less-than-stellar. The whole picture must be illustrated — as Rosen played under three different offensive coordinators with their own individual schemes. It also must be pointed out that UCLA has an absolutely horrendous offensive line. Rosen was consistently battered and bruised due to porous play up front. Had he played for a more stable team, you’d likely not hear about injury concerns.

I watched him play in person the past 2 years and he might be the most mentally and physically tough guy I’ve ever seen.. https://t.co/zaYIYqRJyX

Now let us compare Rosen to the other quarterbacks taken ahead of him.

Allen has a cannon for an arm — though he’s been troubled by accuracy issues. Completing 56.2-percent of his passes isn’t great when factoring in Allen’s competition level. Additionally, 30-percent of Allen’s throws traveled zero-to-five yards.

Troy Aikman on with The Musers: “Josh Allen has a really strong arm. When I was at his pro day, he threw a ball 80 yards and I’m not sure he couldn’t have thrown it farther. But he struggled a bit with accuracy and I’m not sure that won’t continue at the next level.”

Mayfield has been billed as a hybrid between Russell Wilson and Drew Brees. This is applicable only to height — as Wilson’s a far more gifted athlete. Duly, Brees was equipped with superior arm strength and touch compared to Mayfield at the same age. While Rosen is often criticized for his personality, he’s not been disrespectful towards opponents on national television — nor has he been involved in legal issues with the police.

Of the three, Darnold has the nicest upside when compared to Rosen. He’s a big, sturdy signal-caller with an ideal set of intangibles. However, Darnold doesn’t have a whole lot of experience when compared to Rosen. As we saw this past year, Darnold is prone to turning the ball over at a high clip. He threw 13 interceptions this year, fumbled 11 times (second-most in D1 this year), and was sacked 29 times. Darnold has smaller hands — which could account for the high fumble totals. He forced things far too often in college, and did have a tendency to struggle against better competition.

Another interesting aspect is how much more pro-ready Rosen is when compared to the aforementioned trio. Aside from participating in more of a pro-style scheme, Rosen took 107 snaps under center this past year. It’s far more than Allen (54), Darnold (5), and Mayfield (3).

After Rosen was drafted, he had this to say:

“I’m more motivated than ever. I’m determined. Honestly, I was pretty pissed off as I saw teams going by, passing on me. After say, four or five went through, I thought I was going to have to fake a smile and pretend I was happy. Honestly, the second I got that call it all went away. And basically just motivation and determination set in. I could have walked straight off a plane to Arizona and gotten straight to work right then.

I thought I should’ve been picked at 1, 2 or 3. I dropped, and I was pissed. I was really, really angry. I wasn’t really showing it. I was trying to keep calm, cool, composed. But I thought I was going to get picked, and I thought I was going to have to put on a face and try and fake happiness. But for some reason, right when I got that call, that’s not what happened. I got really happy and really motivated.”

Some may call Rosen ungrateful upon hearing these quotes. Others may be quick to call him cocky. However, this is just par for the course. Rosen is who he is. With every great player comes confidence. Though some operate with more of a reserved sense, Rosen is unapologetic.

It will be fascinating to see how his pride off the field may or may not translate to success on the field.