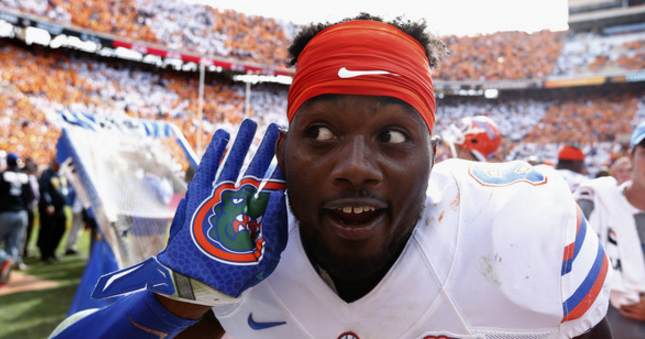 The Jacksonville Jaguars are the only franchise in football that rivals the Cleveland Browns for ineptitude both on and off the field. While the Browns continue to deal with the PR nightmare that is Johnny Manziel, the Jaguars are now facing a humiliating incident involving rookie Dante Fowler Jr.

The pass rusher didn’t play a single snap this season as a result of a torn ACL suffered during preseason, but that hasn’t stopped the former Florida Gator from attracting headlines. TMZ Sports released a video showing Fowler refereeing a fight between two women in an apartment complex:

The brawl that Fowler gladly watches take place in front of him is between his current girlfriend and the mother of his child. It’s certainly a humiliating incident for Jacksonville, and one that has led both Fowler and the Jaguars’ organization to release statements.

Fowler said, “I am embarrassed and have apologized for my actions to everyone involved. As a family, we have been dealing with this moment and the conflict that led to it since this occurred. The video surfacing is a sad reminder that emotions got the best of all of us. I take 100 percent responsibility for everything that happened.”

The Jaguars added: “”Dante brought the incident to our attention prior to the video released and was embarrassed and remorseful. Violence of this type against others is unacceptable in our society and to our organization. We will continue to look into the incident while offering resources and providing support to Dante and his family to help them through this private matter.”

Fowler is expected to be an impact player for the Jaguars when he makes his debut next season, but will need to stay out of trouble if he’s going to contribute. Otherwise, we could be witnessing Johnny Manziel 2.0 – a player oozing with talent incapable of behaving like a professional.