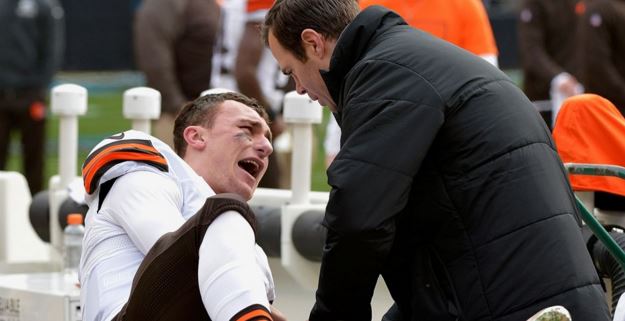 The Cleveland Browns released troubled quarterback Johnny Manziel on March 11, officially ending a bizarre two-year partnership. With the former Texas A&M star now a free agent, Manziel will need to prove to skeptics that he still belongs in the NFL.

Former agent Erik Burkhardt dropped Manziel as a client when the 2015 season ended, and had this to say about the 24-year-old quarterback:

“It has become painfully obvious that [Manziel’s] future rests solely in his own hands. His family and I have gone to great lengths to outline the steps we feel he must take to get his life in order. Accountability is the foundation of any relationship, and without it, the function of my work is counterproductive.”

Burkhardt is referring to Manziel’s inability to stay out of trouble, as the quarterback’s offseason has been marred by a domestic violence incident and consistently reckless behavior. Rather than make significant changes though, Manziel is simply hoping a different agent will be the key to finding a new home in the NFL.

Manziel has hired Drew Rosenhaus – one of the biggest agents in professional sports – to help him. The 2014 first-round pick has had a nightmarish start to his career, and Rosenhaus will now be faced with the difficult task of convincing teams Manziel’s antics (both on and off the field) are a thing of the past.

Manziel’s talent as a dual-threat quarterback has never been questioned, but his 1,675 passing yards, 7 touchdowns and 7 interceptions in 14 total games is certainly discouraging.

Between the unimpressive on-field play and constant distractions, it might be harder for Manziel to land a new NFL job than Rosenhaus ever anticipated.