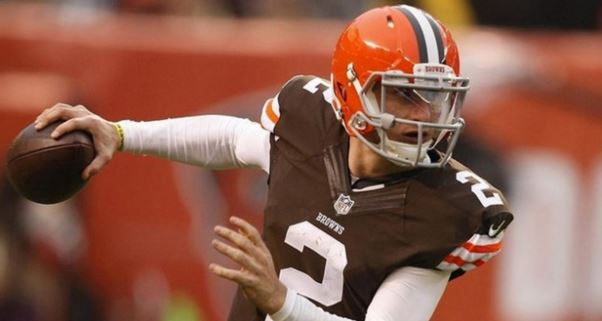 After another tumultuous season in which they finished 3-13, the Cleveland Browns promptly fired both their general manager (Ray Farmer) and head coach (Mike Pettine). Pettine was 10-22 in two seasons with the team, but couldn’t get on the same page with his guys in 2015 – especially his quarterbacks.

Since 1999, Cleveland has started 24 different quarterbacks. However, this quarterback carousel was supposed to change when they selected Johnny Manziel 22nd overall in 2014. Despite entering rehab early in 2015 following a dreadful rookie season, Manziel was begrudgingly given every opportunity to prove that he’d changed for the better.

All that was asked of him was that he avoid making headlines, but Johnny proved unable. During the team’s bye week, Manziel was caught holding bottles of liquor on camera (but vehemently denied drinking from them). Although Cleveland tried to discipline him by demoting him to third string for a week, injuries led to Manziel regaining the starting role for most of December.

However, a concussion suffered in Week 16 led to him being declared “out” for his team’s Week 17 game against the Pittsburgh Steelers. Due to the NFL’s concussion protocol, Manziel needed to report to the team facility on Sunday, but he failed to do so. Instead, according to USA Today, Manziel was spotted in Las Vegas and simply chose not to show up to the Browns’ facility.

For as dysfunctional as the Browns’ franchise is, one thing seems clear – Johnny Manziel will not be with the Cleveland Browns next season.

Cowboys owner Jerry Jones has shown interest in acquiring Manziel, and since the Browns have an opportunity to draft a franchise quarterback with the No. 2 overall pick, a trade to Dallas seems inevitable. Both sides would be happy, and “Johnny Football” could once again escape without being held accountable for his behavior.

Unfortunately for Manziel, one of these days, his actions are going to cost himself a job – not just his coach and general manager.