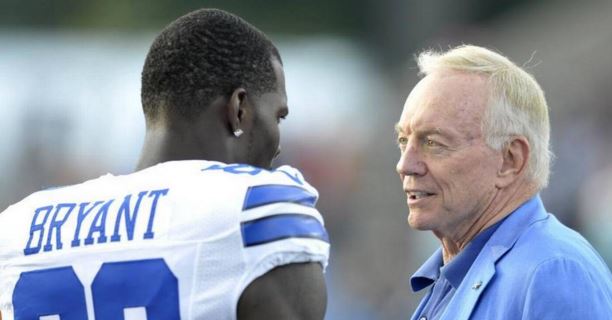 This season has been nothing short of a disaster for the Dallas Cowboys. Tony Romo has broken the same collarbone twice, DeMarco Murray’s void at the running back position has been much more difficult to overcome than expected, and Dez Bryant looks like a far cry of his typically dominant self.

With Romo on injured reserve, Murray on the Philadelphia Eagles, and the Cowboys sitting in last place in the NFC East, there has been talk of sitting Bryant for the remainder of the season. After returning from a broken foot earlier in the year, Bryant is now dealing with knee and ankle injuries. His inability to stay healthy has slowed him down tremendously, as the star wide receiver only has 27 catches, 351 yards and two touchdowns in eight games.

But despite Dez’s struggles, Cowboys owner Jerry Jones has stated the Cowboys will not be shutting down for the rest of the season. Telling 105.3 The Fan in Dallas “we’ll go balls out with Dez,” it’s clear Jones wants Bryant to finish the season on a high note. Bryant has looked out of rhythm all year, and with journeyman quarterback Matt Cassel manning the offense, any bit of success involving Dez appears unlikely.

But with the way the Cowboys’ season has gone, as long as Bryant can finish the season in one piece, it has to be considered a win for ‘America’s Team.’