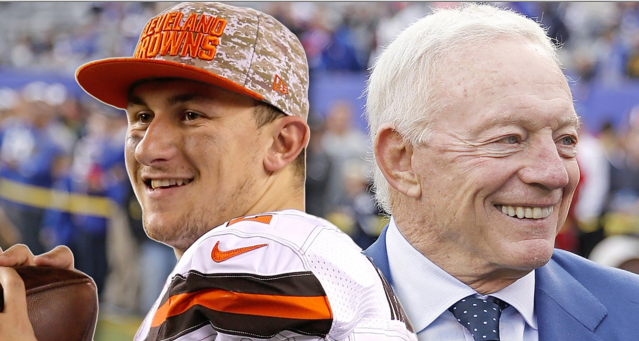 Free agent quarterback Johnny Manziel has had a tumultuous start to his career, and now finds himself looking for a new NFL home. While the hiring of agent Drew Rosenhaus will certainly help, it has become increasingly clear that Manziel will need to sort out his personal issues before any NFL team gives him another chance.

As a native of Texas and former Texas A&M Aggie, Manziel has been linked to the Dallas Cowboys since the moment he declared for the NFL. Cowboys Owner Jerry Jones has never been shy about his interest in Manziel becoming Tony Romo’s successor, as ‘America’s Team’ almost drafted him in 2014 when they had the chance.

Instead, the Cowboys selected interior lineman Zack Martin with the 16th overall pick, which has proven to be a much more savvy move. Martin has already developed into one of the top interior lineman in the NFL, while Manziel has amassed a total of 1,675 passing yards, 7 touchdowns and 7 interceptions in two seasons with the Cleveland Browns.

Despite Manziel’s initial struggles, Jones won’t rule out the chance that the Cowboys eventually acquire the dual-threat quarterback. Jones has long been a supporter of players with off-field struggles and commented on his interest in helping Manziel:

“I would in any way offer to help him work to be where we all are rooting for him to be, which is having a successful life and football career. I would do that. You say, ‘Well, is that because of football?’ Well, I might not have been aware of this had it not been for football.”

Jones continued, “I’m aware of it. With that, with me, comes a motivation if it’s appropriate within the rules or within the guidelines of the NFL if we can be of help in the promise of being a part of the NFL through the Cowboys, I certainly look to that.”

Jones also acknowledged that Manziel is nowhere near capable of competing for an NFL franchise right now, but when he is, we can expect Dallas to be the ones vying for his services.