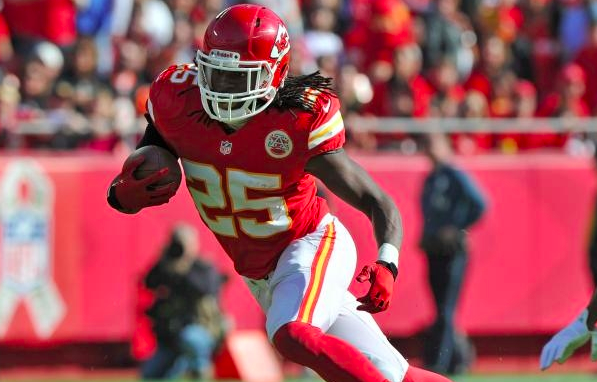 Early in the third quarter against the Chicago Bears, fantasy football fans let out a collective gasp when Jamaal Charles crumbled to the ground. Trying to make a cut back move at the line of scrimmage, Charles’ right leg completely buckled on him.

Unfortunately, the initial guess of a torn ACL proved to be correct, as Charles will miss the rest of the 2015 season.

For fantasy owners who also drafted Charles in 2011, this certainly feels like terrible déjà vu. Now, they are left to head to the waiver wire for the likes of Charcandrick West (don’t worry, I don’t know who that is either), and Knile Davis.

As much as this shakes up fantasy football squads, it is also disappointing news for any football fan. Charles leads all running backs in NFL history with a career 5.49 yards per carry average. The former Texas Longhorn running back is one of the biggest home-run threats in football, and will be sorely missed on an offense led by the ultra-conservative Alex Smith.

Now at 1-4 and four games out of first place in the AFC West, the Chiefs must turn to Jeremy Maclin and Travis Kelce to carry the offense. As a defensive coordinator, it would be hard to fathom a less intimidating set of skill players to game-plan against.

Head coach Andy Reid will have to work some tremendous magic to keep this team out of the discussion for the 2016 Draft’s No. 1 overall pick. Kansas City’s season has certainly come to an abrupt halt, and unfortunately, so have many fantasy football owners’ playoff aspirations.