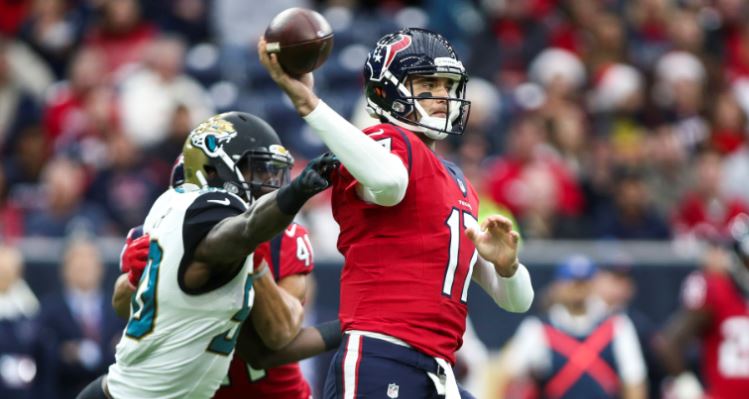 The AFC South has long been the laughing stock of the NFL, and this past Sunday did nothing to help its poor reputation. After an ugly 21-20 victory for the Houston Texans, members of both teams left the field disappointed.

For Houston, the terms “franchise quarterback” and “starting quarterback” no longer apply to Brock Osweiler. During what has been a nightmare season for the $72 million offseason acquisition, Osweiler officially hit rock bottom in this Week 15 showdown.

Following Osweiler’s second atrocious interception only 20 minutes into the game, Houston head coach Bill O’Brien had seen enough. To the delight of the Texans crowd, O’Brien benched Osweiler and brought in 2014 fourth-round draft pick Tom Savage. The move proved to be the correct one, as Savage rallied Houston from a 13-0 deficit to eke out the victory.

Savage’s 23-for-36 performance for 260 yards was enough to already be named the starter for Houston’s Week 16 tilt with the Cincinnati Bengals, leaving Osweiler’s long-term future in serious jeopardy.

Osweiler’s demotion likely isn’t as painful since he’s still being paid $18 million this season to hold a clipboard, but things are a little less rosy for Gus Bradley of the Jaguars. Jacksonville’s ninth straight loss resulted in the team firing Bradley, who was an inexplicable 14-48 in nearly four seasons as head coach. Entering 2016 as young team with lofty expectations, the Jaguars never came close to matching them. Much of the blame was placed on Bradley, who proved unable to translate his immense success as a defensive coordinator in Seattle to Jacksonville, and now sits with the lowest win percentage by a head coach in NFL history (.225).

Between Osweiler’s unfavorable passing numbers and Bradley failing to win more than five games in a single season, neither move can be considered shocking. As the 2016 regular season comes to a close with the quarterback and coaching carousels already in full swing, don’t expect Osweiler or Bradley to be representing an AFC South squad in 2017.