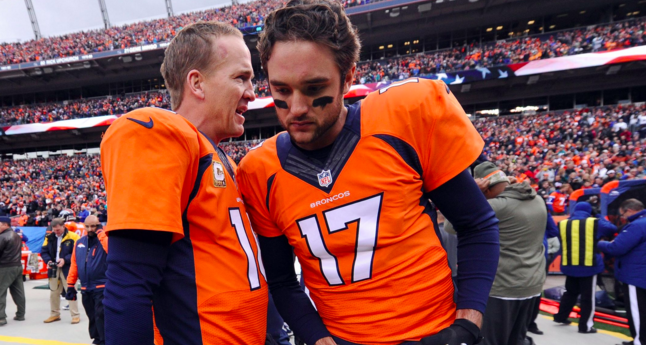 The Broncos are a legitimate Super Bowl contender, and contrary to what you might’ve believed at the start of the season, Peyton Manning isn’t the reason for this. In fact, it’s quite odd that Denver is poised for a postseason run without Manning behind center. But lo and behold, Brock Osweiler has risen from Arizona State University to usurp the quarterback throne.

When John Elway drafted the 6’8” quarterback in 2012, everyone knew the kid would be Peyton Manning’s eventual successor. However, no one could have assumed his rise would come this quickly.

In two games, Osweiler has led the Broncos to two victories over the Chicago Bears and the undefeated (at the time) New England Patriots. But one question remains: what happens if and when Peyton Manning is healthy? It’s tough to bench a future Hall-of-Famer and arguably the best quarterback of all-time, but Manning might just be stuck doing Nationwide commercials with the way Osweiler is playing.

Let’s take a quick look at the numbers.

While the passing numbers are clearly in Osweiler’s favor, the running game has flourished under the former Sun Devil as well. With Osweiler able to run plays from the I-formation (unlike Manning), Kubiak’s zone-blocking run scheme can be much more effective. Running backs C.J. Anderson and Ronnie Hillman rushed for 179 yards on 32 carries against the Patriots, including a 48-yard, game-winning touchdown run.

For as important as the establishment of the running game has been, it is the difference in mobility that gives Osweiler the nod. The nicest way to describe Peyton’s mobility is that there is none of it. His spine, neck, and foot all hinder him from being elusive in the pocket and mobile on play-action passes. It couldn’t be more different with Osweiler. The kid has an ability to move around in the pocket and evade sacks instead of falling to the ground any time a rusher is nearby.

Overall, Osweiler has seemed to finally take the reins in Denver. He could lead the team back to the Super Bowl thanks to a strong defense, and his ability to protect the ball. It will be hard for Manning (and NFL fans) to watch him carry the clipboard the rest of the season, but it’s Kubiak’s only option if Denver is to win their first Lombardi Trophy since 1999.