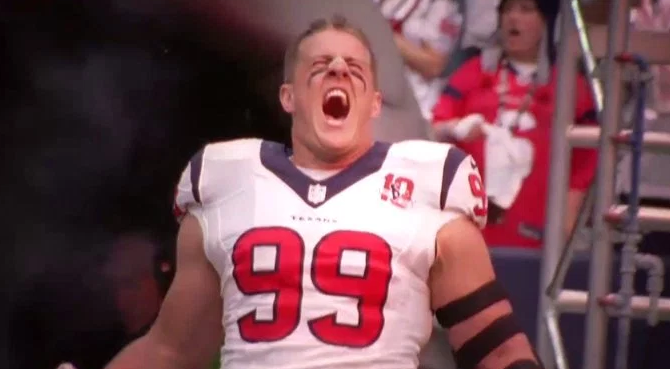 J.J. Watt is known for being a team-oriented superstar, making it no surprise that he wanted to celebrate his 27th birthday with his teammates. However, the way he went about it was far from conventional.

The former Wisconsin Badger had a private jet fly 20 Texans teammates up to his 36-acre cabin in Wisconsin. The spacious offseason home for Watt is close to his hometown of Pewaukee.

Included among the 20 teammates were star defensive players Jadeveon Clowney and Brian Cushing. Since his teammates arrived, they have been training together in Watt’s spacious barn that he converted into a gym.

If Snapchat is any indication, the bonding experience seems to be going quite well. Texans beat reporter Tania Ganguli tweeted this photo showing the guys enjoying themselves: Houston is coming off an unexpected AFC South division title, but were humiliated by the Kansas City Chiefs in the opening round of the playoffs. With quarterback Brock Osweiler now running the offense and an elite defense led by Watt, the Texans hope to assert themselves as Super Bowl contenders this season.

Team morale won’t be an issue, and as is the case with most good things involving the Texans, it can be attributed to J.J. Watt.