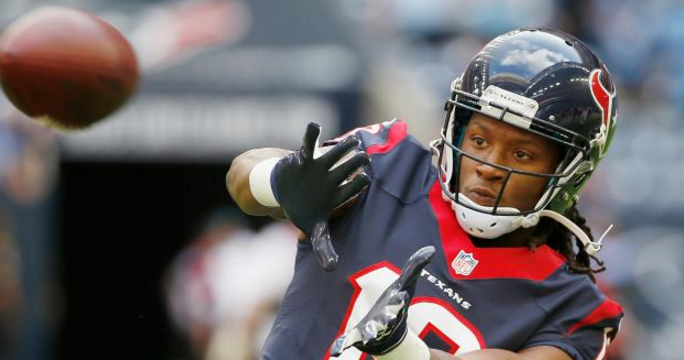 DeAndre Hopkins has been the best fantasy wide receiver this season. Could you imagine the numbers he would be posting if he had even a semi-competent quarterback?

The series Hard Knocks on HBO followed the Houston Texans this offseason – a team many expected to succeed in the extremely putrid AFC South division. Despite being 2-5, Houston is still in the playoff hunt, and their stud wide receiver, DeAndre Hopkins, is the No. 1 reason why.

America isn’t aware just how quickly Hopkins has ascended to stardom. Coming out of Clemson, Hopkins was drafted in the first round to be the eventual successor to Andre Johnson. Johnson left via free agency and is now struggling with the Indianapolis Colts, and Hopkins has had absolutely no problem filling the void. In standard fantasy leagues, DeAndre is ranked first in total points with at least five catches and 50 yards in all seven games this season.

Only one game back of the Indianapolis Colts for first place in the AFC South, the Texans desperately need a win over the lowly Tennessee Titans this week. Considering how Hopkins has fared thus far, it seems logical that he’ll continue on his rampage through every defense he plays against.

By the end of his playing career, Hopkins has a legitimate chance to pass Andre Johnson as the team’s all-time leading receiver. Perhaps the most terrifying part is that Hopkins just turned 23 years-old this past June. He’s already established himself as the No. 1 fantasy receiver, and seems poised to keep that going in Week 8. Look out Johnson, your title as greatest wide receiver in Houston Texans history could be very short lived.