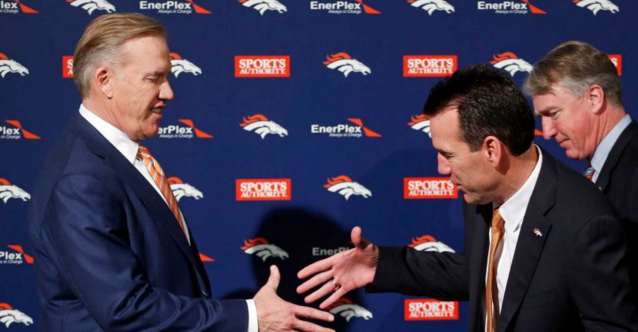 The Denver Broncos are back in the Super Bowl, and this time, it isn’t because of Peyton Manning’s brilliance. In his first season as head coach of the Broncos, Gary Kubiak has done a remarkable job, guiding his team to a 12-4 record and the No. 1 seed in the AFC. But the season was far from easy, as Kubiak had to deal with one of the craziest quarterback carousels in NFL history.

Manning’s horrendous play early in the season resulted in benching the future Hall of Famer, but Kubiak boldly reinserted him into the starting role for the postseason. It was a controversial move, but fans and the Denver front office are certainly thrilled with Kubiak’s decision.

General manager John Elway said, “The bottom line is I know Gary, and he knows what it takes, and he has done a tremendous job this year with the team. When he came in here, he had won a lot of football games. And to be able to come in and get us back to the Super Bowl has been tremendous. There is not a better guy for the job.”

Kubiak has been coaching in the NFL since 1994 and is well versed with the Denver Broncos. He was drafted in the 8th round by the team in 1983, and played in Mile High Stadium until 1991. The former quarterback lost three Super Bowls as a player, but redeemed himself as an assistant coach for the Broncos, winning the Lombardi Trophy in 1998 and 1999.

The Kubiak hire is already showing its dividends in the first year of his four-year contract. He has a major challenge ahead when the team faces the Carolina Panthers in Super Bowl 50.

It will be tough to take down the 17-1 Panthers, but after out-coaching the best coach in the NFL (Bill Belichick) in their most recent game, Kubiak has shown he is more than capable of leading his team to a victory.