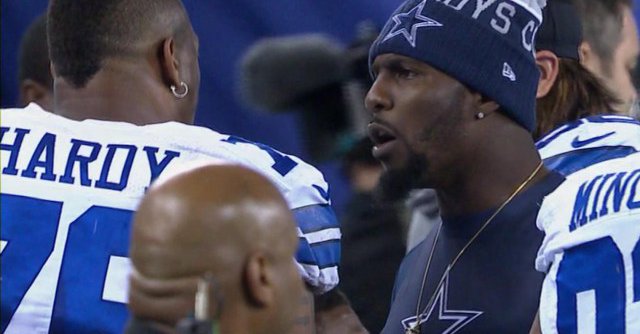 Already one of the most hated men in the game of football, Greg Hardy was known more for his behavior off of the field than on it. However, a ridiculous outburst after the Cowboys gave up a kickoff return touchdown to the New York Giants has put Hardy back in the headlines.

Hardy was furious after his team allowed the touchdown, and felt the need to run over to special teams coach Rich Bisaccia to voice his displeasure. After some shoving and a shouting match between the two, Cowboys wide receiver Dez Bryant got involved.

For once, Bryant actually looked like the rational one screaming on the sidelines. If you manage to make Bryant look like a team-oriented guy, then you must be a really terrible teammate. Sadly, that is the reality that Greg Hardy must now face.

Perhaps the most shocking story coming from all of this is the announcement by Jerry Jones that he is currently working on a contract extension with Hardy. It’s disappointing to witness an NFL franchise support someone who has shown such despicable behavior, but it’s a constant reminder that in this money-making business, it’s all about how they produce on the field.

With three sacks in two games, Hardy will remain on the field for as long as he isn’t in prison. Unfortunately for Jerry Jones, his recent behavior suggests the Cowboys won’t have him by Week 11.