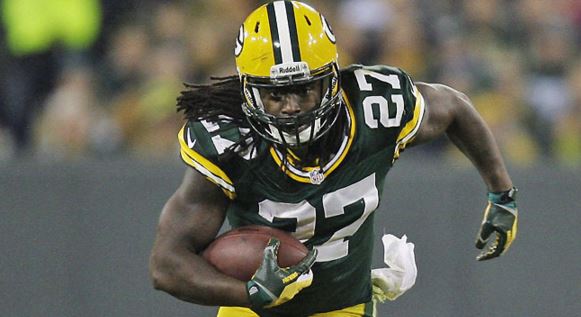 Days after the Packers’ overtime loss to the Arizona Cardinals in the NFC Divisional round, head coach Mike McCarthy didn’t mince words regarding running back Eddie Lacy. After arriving for training camp out of shape and failing to find his groove for the 2015-2016 season, McCarthy said Lacy “cannot play at the weight he was at [last] year.”

Despite concerns that weight issues would plague the 3-year veteran for his entire career, it already appears that Lacy has taken McCarthy’s message to heart. On the Packers’ first day of their offseason program, Lacy’s teammates came away extremely impressed with the running back’s progress.

“I was ready to crack a joke, but I won’t. He looked good,” said wide receiver Jordy Nelson. Defensive end Mike Daniels echoed Nelson’s sentiments, saying “I think Eddie looks good, man. We’ll see when the pads come on and everything, but I do think he’s a guy who rises to the occasion.”

Reports project Lacy has already lost 15-18 pounds as a result of his time spent with fitness guru and P90X creator, Tony Horton. The two have trained in Wyoming and California throughout the offseason and should have the 2013 Offensive Rookie of the Year primed for a renaissance season in 2016.

With a fully fit Lacy and Nelson returning from an ACL injury that cost him all of last season, the Packers’ vaunted offense should return to peak form. That could spell trouble for the rest of the league, as Green Bay is a legitimate threat to win their second title in the past six years.