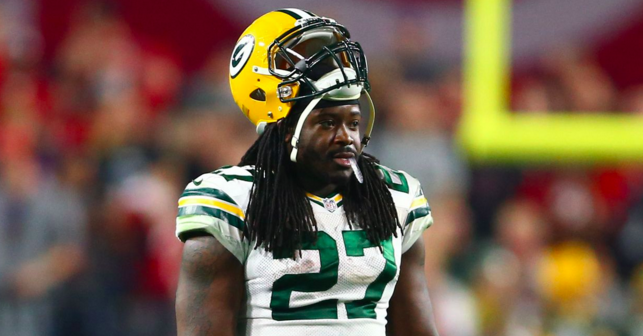 At various points in the season, Lacy was demoted to second string and replaced by veteran running back James Starks. When asked about the lack of snaps, the hefty running back stated that Starks “was the better player between the two of [them].”

The Alabama Crimson Tide product picked up the slack towards the end of the season, but he seemed to have lost his quickness and agility — his runs seemed more like rumblings. Lacy is listed as 5’11” and 234 pounds, but many believe he weighed closer to 250 this season.

After two 1,100+ yards season to begin his career, Lacy only ran for 758 yards and 3 touchdowns this year. The Packers had seen enough, and had no problem telling Lacy he has some major work to do this offseason.

Lacy’s camp has already been in contact with the creator of P90X, and it appears Green Bay’s running back is taking the weight demand seriously. The running game’s ability to take pressure off Aaron Rodgers has always been vital to Green Bay’s success, as the Packers desperately need Lacy to regain his stellar form.

If Lacy can slim down to look more like a running back and less like a linebacker, watch out for the Packers next season.