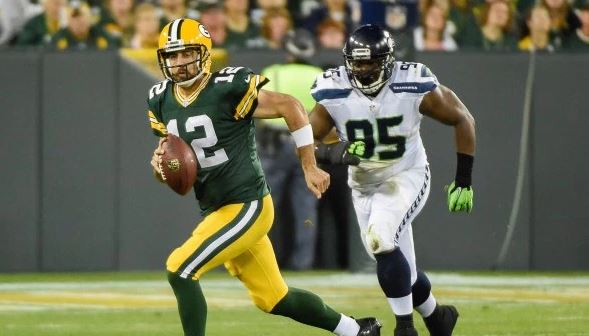 It was the same game in a different stadium.

That’s likely what was going through the mind of every Green Bay player/fan as the Seattle Seahawks took the lead after trailing 13-3 at halftime. This of course came on the heels of last year’s NFC Championship game in which the Packers led 16-0 at halftime in Seattle before eventually losing in overtime.

But at Lambeau Field, the Packers weren’t ready to let history repeat itself.

Despite losing Eddie Lacy to an ankle injury earlier in the game, the Packers stormed back from the 17-13 deficit. Rodgers immediately led the Packers to a field goal, the defense forced a punt, and the Green Bay offense marched down the field on an 11 play, 80-yard touchdown drive. After converting on the two-point conversion, the Packers found themselves up 24-17.

On the next drive, Russell Wilson managed to gently toss an intended screen pass to a Green Bay defensive lineman. Of course, it wouldn’t be a true Packers-Seahawks showdown without any controversial calls. After Jayrone Elliot of the Packers intercepted the pass, he fumbled the ball which resulted in a huge scrum. Despite a Seahawks player emerging from the pile with the ball, the refs ruled that it was Green Bay’s ball.

The Packers went on to kick a field goal following this turnover to escape with a 27-17 victory. Aaron Rodgers has now thrown 43 touchdowns since his last interception at Lambeau, which (probably) beats his predecessor Brett Favre’s record by 41.

Looking at the past three games between these teams, the winner has been decided by a botched ‘Hail Mary’ call, an onside kick, and a bizarre fumble recovery ruling. At this point, it’s impossible to guess what the next game might come down to. But based on how these two teams have ruled the NFC in recent years, we will find out the answer in this year’s NFC Championship game.