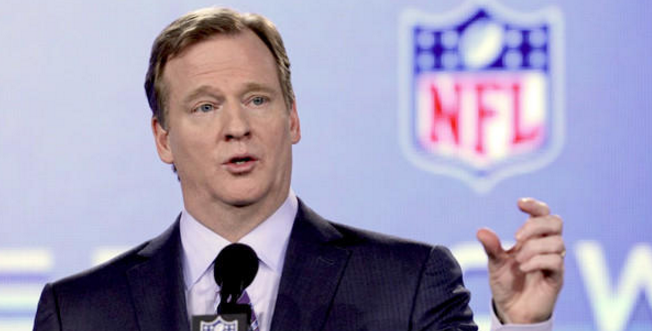 With all the news of CTE and long-term injuries affecting former football players, many have questioned whether they would allow their offspring to play the game.

When Commisioner Roger Goodell was asked, his response surprised many. Not only would he say he would allow it, but he says that he would encourage it.

However, this scenario is entirely hypothetical, as Goodell is the father of twin girls. But the commissioner, who played the game for almost a decade, says he believes the game is making major progress with concussions and other major injuries.

Goodell acknowledged the risk involved in playing the nation’s most popular sport, but claims the risk has become extremely long-term. Chronic traumatic encephalopathy, or CTE, has affected many former NFL players from Junior Seau to most recently, Antwaan Randle El. The side effects from this disease include things such as memory loss and physical weakness, and has been traced to even lead to suicide.

The amount of lawsuits filed by former NFL players is uncanny. It’s not just football though, as new reports have surfaced that it is possible BMX legend Dave Mirra had CTE before committing suicide earlier this week.

One thing is for certain, the game of football is dangerous. Despite the many negatives though, the game is still thriving. Roger Goodell is doing everything in his power to keep that going — even pushing his nonexistent son to play the hard-nosed sport.