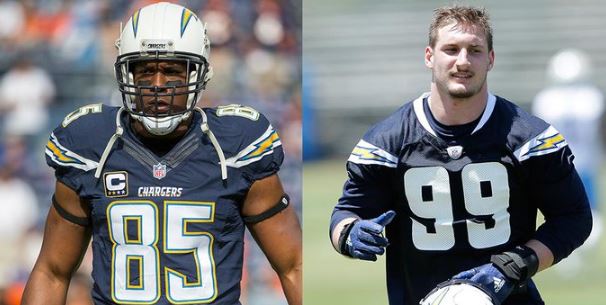 The San Diego Chargers are coming off a disappointing 4-12 season in 2015, and are eager to turn things around in 2016. But while most teams get to use the offseason focus on improving, a contract stalemate between the front office and first-round pick Joey Bosa is occupying the organization’s attention.

The former Ohio State Buckeye is the only first-round pick who has yet to sign with his respective franchise, and sources indicate both sides are nowhere near an agreement. In fact, talks have reached such an impasse that Bosa’s mother, Cheryl, took to Facebook to express her displeasure:

“It bums me out for (Joey) so much. I wish we pulled an Eli Manning on draft day.” Of course, Joey’s mother is referring to Eli Manning’s demand to be traded after being selected first overall by San Diego in the 2004 NFL Draft. Manning was then sent to the New York Giants in exchange for Philip Rivers, and the rest is history.

It’s certainly an ugly start to a Joey Bosa-Chargers relationship, and even some of the defensive lineman’s teammates have grown annoyed. All-Pro tight end Antonio Gates, a future Hall of Famer who is no stranger to contract holdouts, weighed in on the matter:

“My advice to any player that’s going through any kind of contract situation is that, at one point, you’ve got to be a man and you’ve got to understand that you’ve got to get ready to play[…] You still have to have that tunnel vision of being able to go out and perform at the highest level.”

“The highest level” that Gates references is clearly a dig at the fact that Bosa hasn’t been practicing with the team during the holdout, missing out on extremely important reps before the season begins.

Gates and the rest of the Chargers can only hope a compromise is reached soon, but with no end in sight, there’s a strong chance Bosa plays the same number of games in a Chargers uniform as Eli Manning.