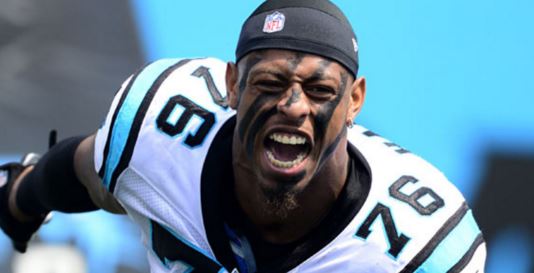 Former Carolina Panther and Dallas Cowboy, Greg Hardy, continues to maintain his innocence regarding a domestic violence case stemming from 2014. The Pro Bowl defensive end sat down for an interview with ESPN’s Adam Schefter and had plenty to say on the incident that caused him to miss the first four games of the 2015 season:

“I’ve never put my hand on ANY women… In my whole entire life, No Sir. That’s just not how we’re raised. As you can tell, like I said again, it’s the Bible belt. It’s just something that’s, I wouldn’t even say frowned upon, just something that’s nonexistent in most southern homes.”

While Hardy has never wavered in denying that a physical altercation took place, photos of ex-girlfriend Nicole Holder severely bruised suggest a different story. When Schefter pressed Hardy on this fact, the pass-rusher responded:

“Pictures are pictures, and they can be made to look like whatever they want to. I didn’t say I didn’t do anything wrong. That situation occurred and that situation was handled, but as a man you can’t avoid situations that aren’t your fault or are your fault.”

Hardy didn’t elaborate on what he did wrong, but is convinced he remains a free agent this offseason as a result of the backlash from Holder’s claims. It also doesn’t help that former teammates haven’t exactly expressed their support for Hardy during this fiasco.

Hardy has been a strong contributor on the field during his six seasons, but until he sorts out his issues off the gridiron, no NFL franchise will be taking a chance on him anytime soon.