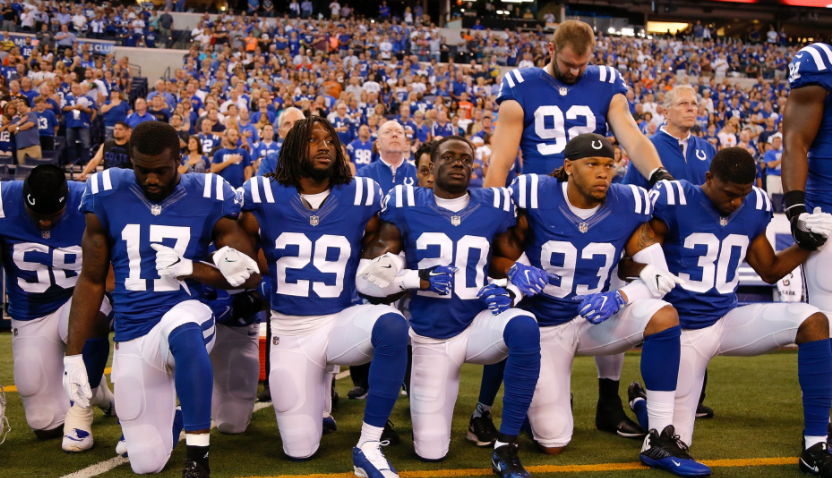 The act of perpetuating stereotypes is ignorant and rather dangerous. This premise is acutely applicable to the current climate of the United States. For a myriad of reasons, the country has adopted a tenseness to everyday life. The politicized nature of today’s society is immensely sensationalized by social media’s broadly-grasping reach. Divisive rhetoric has race relations spiraling into a quickly-evolving form of panic.

Essentially, the collective ethos of this country as a whole is being tested perhaps more than ever before. It is at this moment where camaraderie and togetherness must supersede immoral tact — particularly in regards to racial sensitivity and equality on all fronts. The United States has long operated under the axiom of a separation of church and state. Independent of each other, we’ve often seen lines blurred due to specific circumstances. On more of a micro-level, there’s generally been a separation between the worlds of politics and sports. Politics are often a hot-button issue. From a fan perspective, sports are often looked at as a reprieve from the overblown dialogue and constant bickering between politicians and pundits alike. For two or three hours, a commonality can be found between people whom otherwise were separated by the constraints of social class, political affiliation and religious affiliation (among other things).

The issue of kneeling has nothing to do with race. It is about respect for our Country, Flag and National Anthem. NFL must respect this!

Whereas we thought the professional sporting world was a safe haven, we’ve been reminded that even those gutting it out on the court and the football field can be scrutinized for their individual views.

Embattled QB Colin Kaepnernick acted as the galvanizing force behind the movement in kneeling during the playing of the National Anthem. Since then, many athletes — from fellow NFL players, to professional soccer players — have followed suit with his example.

Speaking at a rally last Friday night in Alabama, President Donald Trump offered his thoughts on those opting to kneel during NFL games:

“Wouldn’t you love to see one of these NFL owners, when somebody disrespects our flag, to say, ‘Get that son of a b*tch off the field right now. He is fired. He’s fired! For a week, [that owner would] be the most popular person in this country. Because that’s a total disrespect of our heritage. That’s a total disrespect for everything we stand for.”

He continued early this week with more commentary on the subject:

“I was ashamed of what was taking place. I don’t think you can disrespect our country, our flag, our national anthem.”

President Trump’s last sentiment was in regards to this past weekend — where virtually every single team in the league had players kneeling during the National Anthem. In the contest between the Tennessee Titans and the Seattle Seahawks, neither team took the field until the playing of the anthem was finished. Players wore t-shirts in support of Kaepernick’s plight, and vocally addressed their thoughts during postgame media scrums.

All-Star PG Stephen Curry of the Golden State Warriors also voiced his opinion on not wanting to visit the White House. Normally, the Championship teams of the major sports within the country will travel together to visit the President in office. It’s been clear that Golden State will not exercise this traditional practice. Amidst the hoopla of the weekend, President Trump offered this thought on Curry — which was then followed by tweets in support of the point guard by fellow NBA greats LeBron James, Kobe Bryant and Chris Paul:

Going to the White House is considered a great honor for a championship team.Stephen Curry is hesitating,therefore invitation is withdrawn!

With everything that’s going on in our country, why are YOU focused on who’s kneeling and visiting the White House??? #StayInYoLane

U bum @StephenCurry30 already said he ain’t going! So therefore ain’t no invite. Going to White House was a great honor until you showed up!

It’s clearly obvious to see this overlapping of political/social issues with professional sports within the country. There’s a large contingent within the United States in an absolute furor over the players’ decisions to kneel for the National Anthem. A large chunk of individuals are calling for the boycotting of the NFL altogether. Duly, there are those pleading for athletes to “stick to sports” rather than voicing their opinion on anything outside of their said profession.

These citizens are unequivocally calling for a separation of politics and sports. Players are meant to act in robotic fashion — tasked solely with entertaining via tremendous dunks and acrobatic touchdown catches. This premise effectively strips players of their intrinsic individuality as humans, and renders them to being nothing more than a product.

Additionally, the narrative of disrespecting the flag comes into play. There are those up in arms over the tangible act of kneeling amidst the National Anthem. Many view this as a slap in the face to those past and present who’ve fought to ensure democracy and safety enjoyed by hundreds of millions of citizens.

There’s something many tend to forget… the flag itself is not emblematic of the military. It’s simply a symbol of freedom. Kaepernick, and the hundreds of players who’ve knelt are within their constitutional right to do so.

Above all else, there’s an overarching question which has yet to be asked: Why did Kaepernick kneel in the first place? He most certainly didn’t do it out of hatred towards the United States — nor did he kneel in order to disrespect the military in any form or fashion.

Here’s Kaepernick’s rationale for why he opted to protest peacefully during the playing of the National Anthem on August 26, 2016:

“I’m going to continue to stand with the people that are being oppressed. To me, this is something that has to change. When there’s significant change and I feel that flag represents what it’s supposed to represent, and this country is representing people the way that it’s supposed to, I’ll stand.

I have great respect for the men and women that have fought for this country. I have family, I have friends that have gone and fought for this country. And they fight for freedom, they fight for the people, they fight for liberty and justice, for everyone. That’s not happening. People are dying in vain because this country isn’t holding their end of the bargain up, as far as giving freedom and justice, liberty to everybody. That’s something that’s not happening. I’ve seen videos, I’ve seen circumstances where men and women that have been in the military have come back and been treated unjustly by the country they fought have for, and have been murdered by the country they fought for, on our land. That’s not right.”

Professional football players make millions and millions of dollars. It’d be easy for them to avoid getting caught up in the controversy surrounding this particular issue. However, these players are leaving themselves vulnerable to verbal abuse, strife, and potential financial loss. This form of peaceful protest is legal, and attempts to address core issues of racial inequality and police brutality.

Kaepernick essentially has been blackballed from the NFL over his tactics on confronting severe issues embedded within the fabric of the country’s history. As we continue to see mediocre-to-poor quarterbacking player on a weekly basis, one has to wonder how Kaepernick can’t land one of the 87 quarterback jobs currently in the league. At only 29 years of age, he warrants a back-up role — let alone a starting one — based upon his impressive career resume.

Kaepernick should not be looked at as a villain, or as a disrespectful person aiming to disparage those serving in the armed forces. Instead, he should be looked at as a martyr. His role in creating this dialogue has truly been profound, and figures to be highly impactful for the foreseeable future.

Athletes across the world are idolized. As Colin Kaepernick has shown, using his platform to attack an immensely significant topic has spurred on imperative conversation. Collectively as a society, we must become more educated, and strive for a united front as opposed to one wedged by misconceptions and the unwillingness to be tolerant of a differing viewpoint.