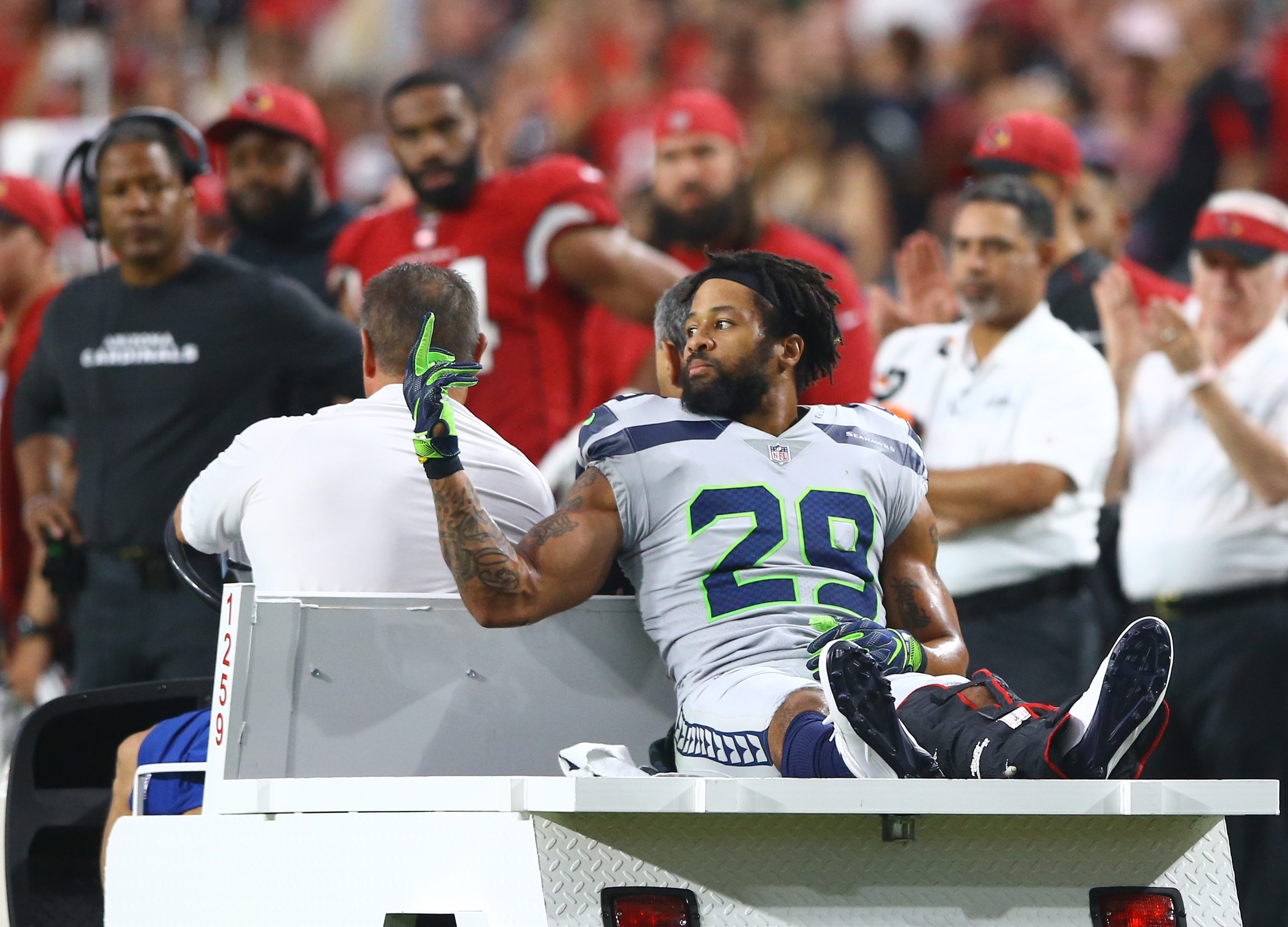 Following a long, drawn-out process, Seahawks star safety Earl Thomas finally reported to the team’s facilities a few days before opening week. Thomas’ contract had yet to be finalized, but instead of taking the Le’Veon Bell route and forfeiting multiple game checks, Thomas figured it was wise to suit up for games, while still electing to not practice. That decision came back to haunt him on Sunday.

Thomas exited Seattle’s Week 4 matchup with the division rival Arizona Cardinals on a stretcher. A broken leg was the diagnosis. Thomas suffered the injury mid-way through the fourth quarter, tripping over a Cardinals receiver on a Josh Rosen touchdown pass. Players from both teams huddled around the wounded safety before the medical staff was able to stabilize Thomas’ leg and get him on a cart. As Thomas was being carted off, he extended a parting gift towards his team’s bench (likely intended for Seattle’s front office) — a middle finger.

The injury will end Thomas’ season, and Seattle will move forward this year without a single member of the ‘Legion of Boom’ secondary. With Thomas set to hit free agency in 2019, this leg injury will serve as both a cautionary tale and a wake-up call to all future players and front offices about the risks of a holdout.

Thomas’ middle-finger salute towards Seattle’s sideline effectively ends any chance of him returning to the team. How in the world could both sides have a civil conversation about a contract after that move? He had given the Seattle organization his all, helping them to two Super Bowl appearances and collecting six Pro Bowl nods along the way. Thomas knew that would sever any ties he may have had with the ball club, and he was content with that decision.

Thomas will be playing for a new team next season, but this injury will undoubtedly play a part in future negotiations. Every time Thomas walks in to a front office this offseason, he’ll be asked how his leg feels, and it will all play a part in the grueling, penny-pinching process that teams must do to ensure future cap flexibility.

The losers of this untimely injury were Thomas and the Seattle fan base…erm or at least the ones that were on Thomas’ side throughout this process. A select few from the ’12th Man’ weren’t very patient during Thomas’ holdout:

He is a selfish punk and a cancer at this point, part of the problem not the solution!

People shouldn’t support Earl Thomas, those who do need to wake up and look at the man Earl has become! He used to care about helping this team and used to love being here, now he’s become a selfish greedy bastard who wants out of Seattle and only cares about his wallet size.

I gotta be honest, I love Earl Thomas, but I’ve grown tired of the prima donna mentality of some of our defensive stars. They’ve become selfish, petulant, children, and if it’s “me first” they need to go first. Let’s rebuild with fresh, hungry, appreciative players. #Seahawks

And that’s the type of criticism Thomas and fellow holdouts have had to deal with. Le’Veon Bell weighed in on the situation following Thomas’ injury:

Le’Veon Bell’s willing to be the “bad guy” so all NFL players get theirs 👀 pic.twitter.com/jGTAYHS0bV

Bell’s holdout has extended past Week 4 of the regular season, with no resolve in sight. Thomas being helped off the field will only further convince Bell to stay away from the field during his hold out. There hasn’t been a good reason to risk an injury with free agency impending.

In the end, all Thomas desired was security, and the team that he helped to two Super Bowls wouldn’t provide him with that. It was a shrewd front office move to not pay a 29-year-old when there are so many holes throughout the roster, but the conclusion to Thomas’ Seattle tenure has left a bad taste in everyone’s mouth.

One thing is for certain, whichever team ends up paying Thomas this summer will be getting a fired-up, All-Pro talent.