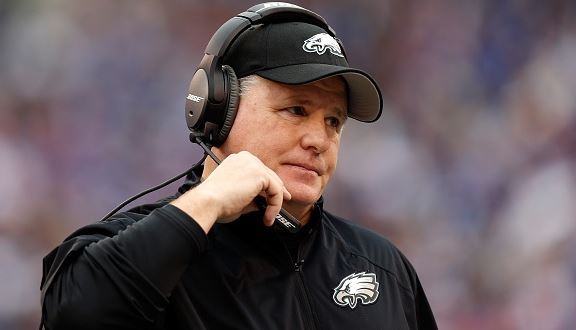 The Chip Kelly saga in Philadelphia gets stranger with each passing day.

Coming off a pathetic 45-14 drubbing at the hands of the Detroit Lions on Thanksgiving Day, Kelly continues to find himself in the headlines for all the wrong reasons. Just last week, reports surfaced that the Eagles’ players were tired of Kelly’s dictatorial ways and had completely tuned him out.

This week, Kelly finds his name being linked to the USC head coaching gig. With Steve Sarkisian out, interim head coach Clay Helton had not been announced as USC’s long-term answer. Rumors have surfaced that USC contacted Kelly, but the former Oregon head coach vehemently denies ever speaking to anyone affiliated with the Trojans.

Helton has now been named USC’s head coach, but the rumors leave many wondering how committed Kelly is to the Eagles’ franchise. Given full control of personnel by Philadelphia’s front office this past offseason, Kelly’s roster cultivation has been nothing short of a disaster.

While there’s no denying that Kelly is an offensive mastermind, his spread offense predicated on tempo and precision hasn’t translated well to the NFL. The argument can be made that he hasn’t had the correct quarterback to run his system, as Sam Bradford and Mark Sanchez don’t scream athleticism and/or accuracy.

But regardless of offensive personnel, it’s clear Kelly shouldn’t be in charge of assembling a defense. With the defensive side of the ball never having been his strong suit, Kelly is more fit as an offensive coordinator than a head coach at the NFL level. With little to no support from his own players, Kelly has to realize he is in way over his head.

Passing up on the USC job – one of the premier coaching gigs in college football – might be the worst move he has made since joining the NFL. And based on the Kiko Alonso-for-LeSean McCoy trade, the decision to let Jeremy Maclin walk in free agency, the release of DeSean Jackson and the Eagles’ current 4-7 record… that’s really saying something.