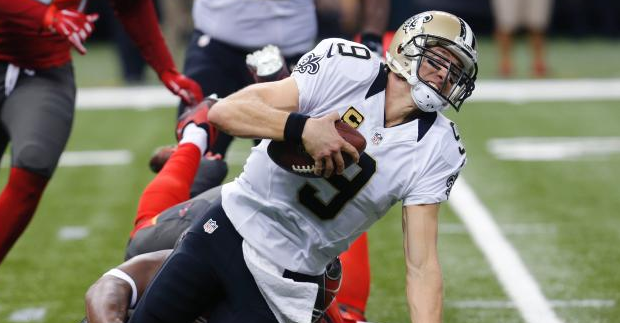 Despite the playoff dream dying out, and the agonizing pain of his torn plantar fascia, Drew Brees of the New Orleans Saints plans to play this Sunday against Jacksonville. Many would question this decision, as there are little to no positives that could result.

To commence, the Saints are eliminated from playoff contention, and at this point are simply playing for draft position. The once dominant NFC South powerhouse has turned into nothing but a roadblock in the wake of the Carolina Panthers’ supremacy.

In addition to New Orleans’ atrocious record, the health of Drew Brees is seriously at risk. The 36 year-old needs time to recuperate in preparation for a better season next year. He became only the fourth quarterback in NFL history with 60,000 passing yards on Monday night, but his ability to continue up the ladder in 2015 will be heavily complicated by this foot injury.

Time is creeping up on Brees, and as his age continues to climb, these injuries need to be properly addressed by the organization.

It will be interesting to see what course of action the New Orleans Saints take. With teams rivaling for draft position, now is the time of year when non-playoff hopefuls actually benefit from losing. While tanking is a word that isn’t supposed to be used, playing Brees certainly gives the Saints a better chance to win.

At a time when winning does more harm than good, the decision is simple – bench Drew Brees for the rest of the season.