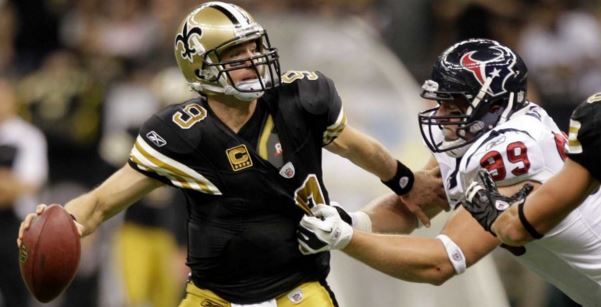 Just when the New Orleans Saints seemed to be figuring things out after impressive wins over the Atlanta Falcons, Indianapolis Colts and New York Giants, they have now lost three games in a row to the Tennessee Titans, Washington Redskins and Houston Texans by a combined 57 points.

Held under seven points for the first time since Drew Brees came to New Orleans in 2006, the Saints were completely overwhelmed by J.J. Watt and the Texans defense. After so many atrocious performances by their defense this season, this was the first loss the Saints’ offense was responsible for.

While the Saints continue to plummet into the depths of the NFC, the Houston Texans are hitting on all cylinders. Currently on a four-game win streak with wins over the Titans, Bengals, Jets and Saints, only the Jets scored a touchdown against J.J. Watt’s crew. After allowing 20+ points in six of their first seven, it is clear this vaunted defense is starting to figure things out.

On the offensive side of the ball, the quarterback carousel has finally come to an end. Bill O’Brien has officially settled on Brian Hoyer as the starting quarterback and cut the always-pouting Ryan Mallett. DeAndre Hopkins continues to establish himself as a top-five receiver and Alfred Blue isn’t as terrible as we all first assumed.

Now tied atop the AFC South, Houston finds itself battling the Andrew Luck-less Colts for a playoff berth. If the defense keeps performing at this level, the Texans will be a threat come playoff time – a thought considered unimaginable when they were sitting at 2-5.

Perhaps the Saints can learn something from this Texans squad – the only way to turn things around is to be featured on HBO’s Hard Knocks next offseason.