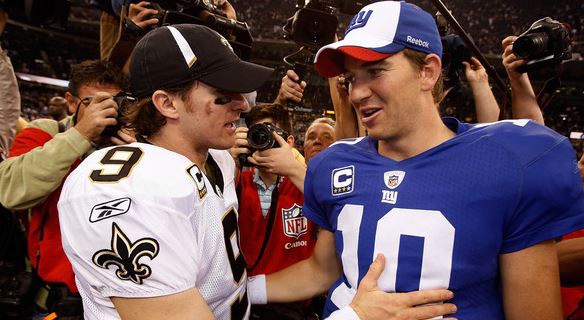 After the New Orleans Saints and New York Giants combined for 14 touchdowns, it felt unfair to watch the game come down to Kai Forbath’s 50-yard field goal. But as has become so typical of the New York Giants, terrible clock management and idiotic penalties resulted in a devastating 52-49 loss.

In the third highest scoring game in NFL history, it’s difficult to dissect takeaways from the game. Were Eli Manning and Drew Brees just too good? Did both defenses fail to realize they were supposed to try to stop the other team from scoring? Or were the Giants trying to lose another close game in historically brutal fashion?

Let’s break these questions down one at a time:

1. Were Eli Manning and Drew Brees just too good?

The two quarterbacks combined for 840 passing yards and 13 touchdown passes. Brees tied an NFL record with seven touchdown passes in a single game, and based on who he was throwing to, he should be given the MVP award now. Accomplishing this feat with his leading receivers being Benjamin Watson and Marques Colston, it’s safe to say Jimmy Graham misses Brees more than the other way around.

Eli Manning only threw for six touchdowns, which sadly wasn’t enough to lead his team to victory. Taking full advantage of having Odell Beckham Jr. on his team, Manning found the co-New Orleans native eight times for 160 yards and three touchdowns. Manning played so well that head coach Tom Coughlin almost looked happy at points throughout the game.

2. Did both defenses fail to realize they were supposed to try to stop the other team from scoring?

It’s never shocking when a Rob Ryan-led defense allows 49 points, but to see Steve Spagnuolo’s squad get carved up for 52 points was baffling. The Giants have struggled against the pass all season (and have been excellent against the run), but they took it to a whole new level this week. Giving up 511 passing yards, it seemed as if they wanted Brees to break records against them. My guess is that in an act of defiance, the defense decided they won’t stop a team from scoring until Jason Pierre-Paul returns to the field.

Watching the Saints give up six passing touchdowns and only force one turnover felt like a typical showing of the putrid New Orleans defense. It’s going to be difficult to keep winning games when allowing 49 points, but it comes with the territory when Rob Ryan is in charge.

3. Were the Giants trying to lose another close game in historically brutal fashion?

It sure seems like they were. New York’s Week 1 loss to the Dallas Cowboys was a result of poor clock management, and it doesn’t appear as if they have learned their lesson. Hoping to kick a last second field goal against the Saints, the Giants’ over-eager ways quickly backfired. Spending two of their own timeouts before punting the ball back to New Orleans, the Giants gave up a 24-yard punt return and committed a face-mask penalty to put the Saints in field goal range.

The rest is history, as Eli Manning looked confused, Odell Beckham Jr. seemed indifferent, and Tom Coughlin scowled while trying to figure out who to yell at. Or in other words, a typical day at the office for the New York Giants.