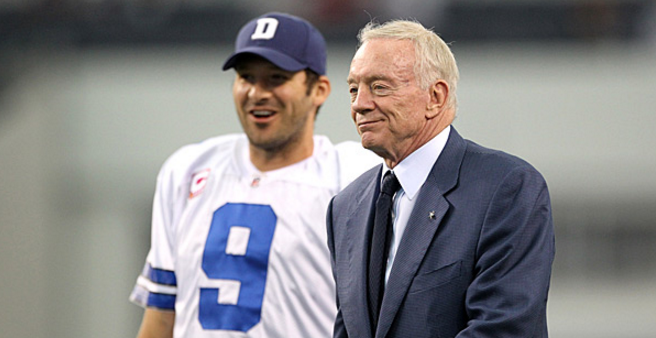 Tony Romo’s season may be over after suffering another collarbone injury, but Jerry Jones has been quick to argue it doesn’t mean his career is too.

Romo has now broken the same left collarbone three times since 2010, and has had multiple back surgeries in that time frame as well. Getting ready to turn 36 in April, many are suggesting Dallas should look for a new long-term solution at quarterback.

But as usual, Jerry Jones doesn’t care what other people think.

In a radio interview on 105.3 The Fan in Dallas, Jones told the host, “this is not a damn debate, guys… You’re asking me what I think, and I think we’ve got outstanding quarterbacking ahead of us for the next four or five years.” Going on to explain that the Cowboys will look to develop talent behind Romo, Jones’ statement eliminates any concerns of a future quarterback competition.

Next year can’t come soon enough for a Cowboys team who had Super Bowl aspirations heading into the season. Now 3-8 and at the bottom of the NFC East, the only Super Bowl on their radar is No. 51.

With the back-up quarterback position a huge question mark after the failed Matt Cassel and Brandon Weeden experiments, Texas native and excommunicated Cleveland Brown Johnny Manziel could be Jones’ solution. A locker room with Greg Hardy, Dez Bryant and an impressionable Manziel seems like something only Jerry Jones would view as a good idea.

But as always, it isn’t a damn debate with the Cowboys’ owner. This is Jerry’s World, we’re all just living in it.