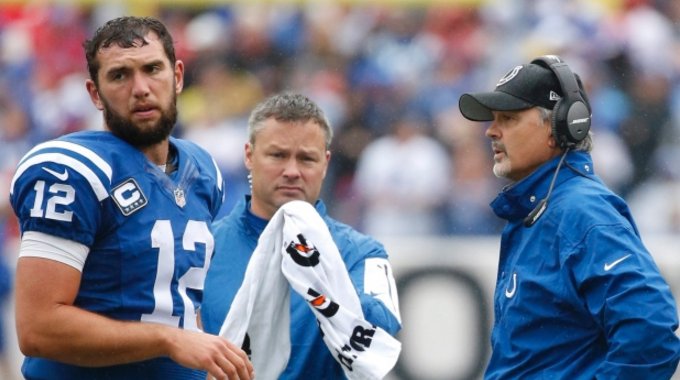 Heading into the highly anticipated rematch of last year’s AFC Championship Game between the Indianapolis Colts and New England Patriots, we expected to discuss both offenses at the game’s conclusion. Instead, it was a bizarre fake punt/attempt to draw New England offsides/worst trick play in NFL history that is dominating the headlines.

Down 27-21 at their own 37-yard line with one minute remaining in the third quarter, Colts head coach Chuck Pagano called for the worst attempt at a fake punt anyone has ever witnessed. Sending their entire set of blockers to the right, Indianapolis left Griff Whalen to snap the ball to Colt Anderson, who was immediately tackled by five Patriots defenders.

Of the many football experts out there in the world, not a single one has offered an explanation as to how this play might’ve worked. With a short field, New England had a quick, six-play drive capped off with a touchdown pass from Tom Brady to LeGarrette Blount to seal the victory. Down 34-21, the Colts were forced to play in hurry-up mode the rest of the game, and were unable get the offense going.

After a rough 0-2 start, Pagano suddenly found himself on the coaching hot seat, but three consecutive victories helped cool off those talks. However, a play-call as terrible as the ‘Snapfu’ very much puts Pagano’s job back in jeopardy.

It may not be the worst play in NFL history, but there’s no doubt Mark Sanchez is hoping this play was stupid enough to make people forget about his infamous ‘butt fumble.’