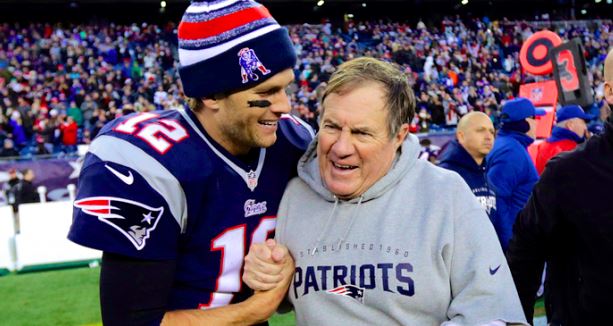 While the trash talk from Denver’s defense keeps mounting, Patriots quarterback Tom Brady has chosen to disregard it entirely. Instead, Brady used his time with the media to discuss what a privilege it is to be facing Peyton Manning for the 17th time in their illustrious careers.

Referencing Peyton’s innate ability to “always come through” for his team, Brady also went on to say, “He’s a great passer. He’s so accurate, throws on time, knows where everybody on the field is, offensively and defensively. He knows how to look defenders off and put the ball in the right location so those guys can catch and run with it. I think he’s just a great pocket passer.”

Belichick added to Brady’s sentiment, saying “There is no player off our team that I have any more respect for than Peyton Manning. His preparation, his consistency, his skills; I would never, ever, ever underestimate him under any circumstance.”

It makes sense for Belichick to never underestimate Manning, but the future Hall of Famer has looked far from his usual self this season. Manning hasn’t thrown a touchdown pass since November 8th, and continues to be picked up by Denver’s elite defense.

Despite Manning’s struggles and Brady’s dominance, it is Brady who has been attracting the criticism leading up to this game. With members of the Broncos referring to him as a “crybaby,” Brady will be as motivated as ever to get his team to a second consecutive Super Bowl.

Brady and Belichick took the high road this week praising Peyton for his brilliance, but on Sunday, they won’t show any mercy.