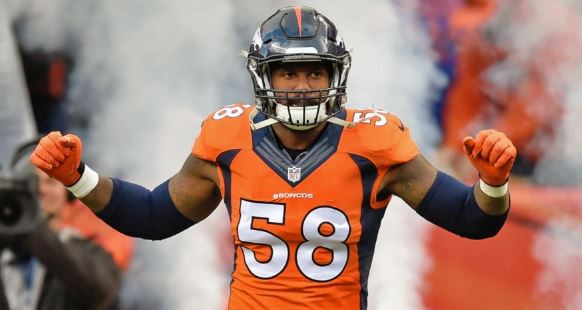 After an MVP performance in Super Bowl 50, linebacker Von Miller knew he was in for a major payday. The 2011 second overall pick signed a one-year franchise tender with the Broncos for $14 million earlier this offseason, but general manager John Elway wants to avoid the risk of losing his 4-time Pro Bowler by reaching a long-term deal immediately.

Negotiations have already begun, and it was reported that Denver offered Von Miller a six-year, $114.5 million contract. The deal would include $39.8 million in guarantees within the first two seasons, but Miller and his representatives have rejected the Broncos’ offer.

The offer is obviously a substantial one, but it’s clear Miller and his agent believe the linebacker is worth more.

The 27-year old has been an absolute menace in recent seasons. Last year, Miller totaled 35 combined tackles, 11 sacks, 4 forced fumbles and 3 fumble recoveries. He won the Super Bowl 50 MVP after an incredible performance which included 6 tackles, 2.5 sacks and a forced fumble that teammate Malik Jackson scooped up for a touchdown.

Denver has plenty of time to figure out a deal with Miller, as the deadline for franchise players to sign long-term deals is July 15. While Miller has publicly stated that the two sides are making progress, the Broncos are hopeful to complete the contract soon.

With the quarterback situation still a work in progress, solidifying the defense (which starts with Miller) would certainly come as a huge relief to the defending champions.