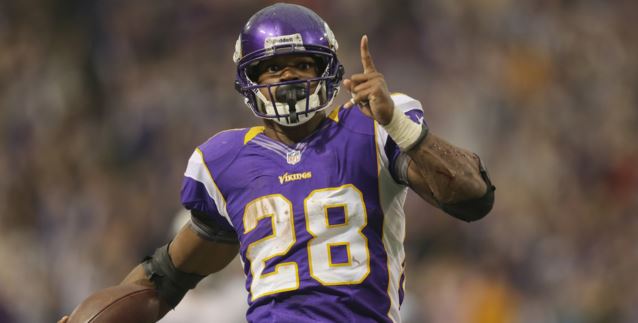 Even at 30 years-old and unable to catch a pass out of the backfield, Peterson simply cannot be stopped. Leading the league with 1,164 rushing yards and second to Devonta Freeman with 8 rushing touchdowns, Peterson has his Vikings (8-3) atop the NFC North division.

After a disappointing performance against the Green Bay Packers in Week 11, Peterson came back strong against an elite Atlanta Falcons’ rush defense. Dan Quinn’s unit was only allowing 87.4 yards per game, until ‘All Day’ obliterated them for 158 yards and two touchdowns.

Throwing would-be tacklers off of him and running as angry as ever, Peterson is at the top of his game. With studs Le’Veon Bell and Jamaal Charles proving to be injury prone, no running back can match Peterson’s skill, tenacity and durability.

In the eight seasons that Peterson has played two or more games, he has surpassed the 1,000 yard rushing mark in seven of them. In addition, if Peterson can score two more touchdowns over the next five games, he will have double digit rushing scores for the eighth time in his career.

Having just passed O.J. Simpson for 18th on the all-time rushing list, the former Oklahoma Sooner shows no signs of slowing down. Barring injury (or despicable behavior), it’s not crazy to think that Peterson will maintain this level of play for three or four more seasons.

That’s tremendous news for Vikings fans, and absolutely horrifying for everyone else.