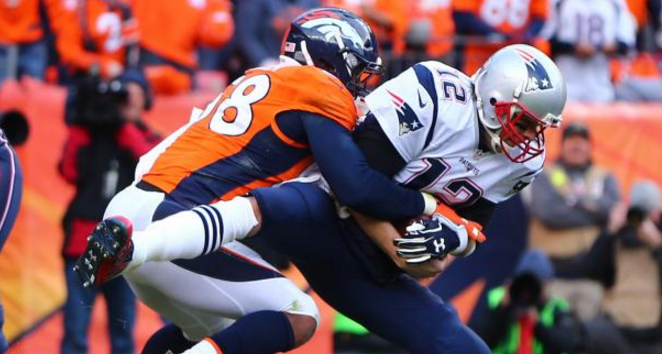 The Denver Broncos staved off a wild fourth quarter comeback try from the New England Patriots to win the AFC Championship and advance to Super Bowl 50.

Tom Brady and his Patriots gave a heroic effort in the final seconds, but it was the early play of Peyton Manning and Denver’s stout defense that helped them hold on for the victory.

In a season in which Manning at times looked done, he miraculously finds himself back in the Super Bowl. He prevailed on Sunday in his 17th career quarterbacking duel with Brady, and showed immense leadership in the process.

Although we see this victory as Peyton’s doing, Sunday’s storyline was the Denver defense. Linebacker Von Miller led the way for Denver with 2.5 sacks and an interception, and was credited with four of the Broncos’ 20 hits on Brady.

Fellow linebacker DeMarcus Ware hit Brady seven times and added had half a sack. This dynamic front duo wreaked havoc, preventing Brady from getting into any sort of rhythm. “Unbelievable,” Broncos cornerback Aqib Talib said of the pass rush. “We can’t ask for nothing more than that.”

After a long shower, Tom Brady emerged with three bandages on his left arm, welts on his right forearm, and was visibly sore during the postgame interview. He held on to a railing after answering questions from reporters, walking slowly after a long and brutal day.

This Denver defense is scary, and clearly asserted its dominance in the most important game of the season. Now, they will have the difficult task of implementing that same damage against Cam Newton and the Carolina Panthers.

If Denver’s defense proves able to do so, their Hall of Fame quarterback will go out on top.