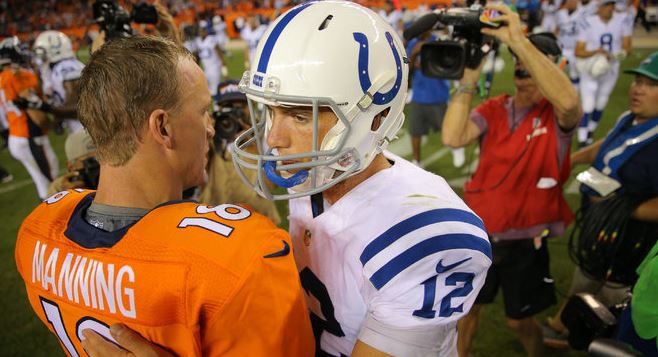 Peyton Manning returns to his first (NFL) home in Week 9, as his Denver Broncos (7-0) take on Andrew Luck and the struggling Indianapolis Colts (3-5). While both star quarterbacks had sky-high expectations heading into the season, neither one has come close to living up to the hype.

The struggles of Peyton Manning have been well-documented, with the 18-year veteran holding the ‘honor’ of being the only quarterback to start and throw an interception in every one of his team’s games. But there is still reason for optimism in Denver, despite Manning’s 7:11 touchdown-to-interception ratio. Coming off a demolition of the Green Bay Packers, Manning looked a bit rejuvenated with a season-high 340 passing yards.

No matter how well Manning plays the rest of the season though, it is their impenetrable defense that will dictate how far they go. Squaring off against the turnover-prone Andrew Luck, Denver’s defense will need to create pressure and force the Colts’ quarterback into making bad decisions.

Making poor choices has proven to be rather routine of Luck this year, as he has already thrown 12 interceptions and fumbled twice in six games. However, these stats are a bit misconstrued since Luck has dealt with a shoulder injury and fractured ribs for much of the season. He played much better in the second half of the Colts’ Monday Night Football showdown against the Carolina Panthers, and will need to carry that momentum into this game.

Of course, Luck doesn’t have the luxury of being supported by an elite defense. The Colts allow 404.9 yards per game, good for 29th in the league, and must perform better than that if they are to be competitive in this game. With the added motivation of playing for their head coach’s job, the Colts will get a much needed victory to avoid a 3-6 start.

Denver’s dreams of a perfect season will be ruined, but if Peyton had to lose to anyone, I’m sure Indianapolis would be his first choice.