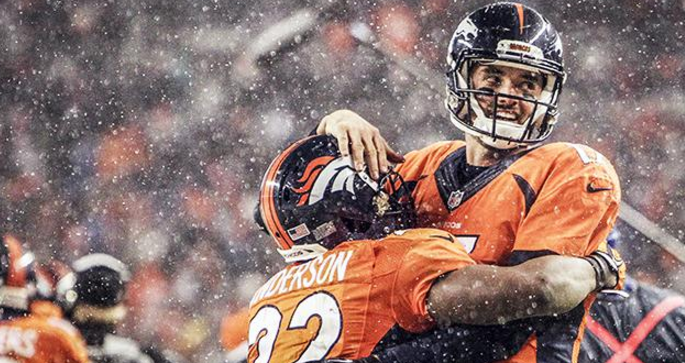 Although we did not have our highly anticipated Brady-Manning showdown, the Patriots-Broncos game exceeded all expectations Sunday night. In what seemed to be a battle of the AFC’s heavyweights, the Brock Osweiler-led Broncos played their best game of the season.

With Manning literally falling apart, it appears the Broncos’ long-term solution has been right in front of them all along. The Arizona State product had some poor moments, but his poise and leadership helped hand the Patriots their first loss of the season.

Not to take anything away from Denver, but it’s time to acknowledge that the Patriots aren’t the same football team from the first eight weeks of the season. Depleted by injuries, New England’s receiving corps looks like Adam Sandler’s rag-tag options from “The Longest Yard.” With no Danny Amendola or Julian Edelman, it’s a tough spot for Brady to be in when the most reliable option is Brandon LaFell.

The brutal hit Rob Gronkowski took in the fourth quarter only made things worse, as a stunned crowd watch No. 87 get carted off the field. While the Patriots were dealt some good news (it’s not a season-ending injury) following the game, it clearly served as a huge momentum shifter.

Despite New England giving the game away, Denver still deserves major credit. Their dormant run game was revitalized as C.J. Anderson and Ronnie Hillman combined for three rushing scores, including the 48-yard game winner by Anderson in overtime. Even though Demaryius Thomas was not in his usual form, others stepped up and produced in his absence.

Denver has shown that even without their ancient leader, they are able to compete at an extremely high level. That’s great news for football fans, as Denver and New England are in perfect position for a rematch in the AFC Championship Game.