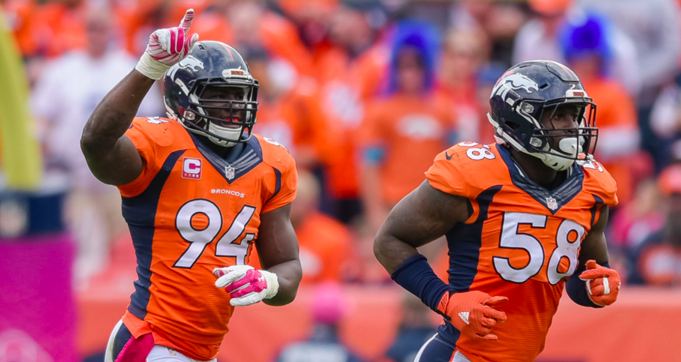 Coming off their Super Bowl 50 win, it’s clear the Denver Broncos will continue to make the defense their No. 1 priority. That starts with their elite pass rush, led by Super Bowl 50 MVP Von Miller and DeMarcus Ware.

Denver already tagged Miller, but heading into the offseason, the team initially considered cutting Ware. However, plans changed, as the Broncos and the 11-year veteran agreed to restructure his contact so he could remain in Denver. The 33-year-old was scheduled to receive a $3 million bonus on Sunday, but instead took a pay cut, dropping his salary from $10 million to $6.5 million.

Luckily for the Broncos, the team no longer faces the $11.6 million against the cap in 2016. Ware does still have the opportunity to earn his $3.5 million back via sacks though. The trigger starts at 8 sacks and ends at 13 — a sack total the Troy product has reached consistently throughout his illustrious career.

In his first nine seasons, all with the Dallas Cowboys, the 2-time Butkus Award winner recorded 117 sacks. He then added 17.5 sacks during his two season stint with the Broncos. Overall, Ware led the league in sacks two different seasons and is a 9-time Pro Bowler.

As a result of his age though, the 11th overall pick in 2005 will likely be on a pitch count this season. The team reported that he will mostly be a third-down specialist, averaging about 35 snaps per game. He has faced back issues in the past and missed five games last season.

Still, Ware has been productive during his tenure with Denver. He had 3.5 sacks during the postseason en route to his first Super Bowl victory.

Anchored by the Miller-Ware duo, the Broncos should once again have the most dominant defense in the league.