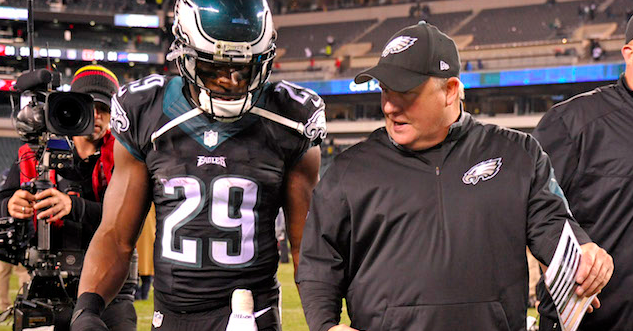 Considered the No. 1 free agent running back of the offseason, DeMarco Murray was expected to thrive in Chip Kelly’s unstoppable rushing scheme. But with 606 rushing yards and four touchdowns on 176 carries, the pairing has been horrendous to say the least.

From the first game of the season until now, Murray has never looked comfortable. The only game he has eclipsed 100 rushing yards this season was in Week 6 against the New York Giants. Last year, he went for 100+ rushing yards in 13 of 18 games as a member of the Dallas Cowboys.

After last season’s campaign of 436 total carries and 2,043 rushing yards, skeptics were worried as to how Murray’s body would hold up. But the strange thing is that Murray hasn’t been given the opportunity to show how he’s feeling.

Despite signing a five-year, $40 million contract this offseason, Murray seems to be in Kelly’s doghouse. With a total of 21 carries in Philadelphia’s last three games, Murray’s lack of usage has been surprising. With defenses wearing down 14 games into the season, now is the time a bruiser like Murray would be most effective.

Unfortunately for Murray, Kelly appears to see the situation differently. With Ryan Mathews and Darren Sproles getting the bulk of the carries, Murray has spent the majority of games watching from the sidelines.

Murray doesn’t even have an explanation for his lack of playing time, telling the media after their most recent game: “I feel great. I feel physically great. I’m not hurt. I’m not sore. I feel good. I’ve never dealt with anything like this in my life. That’s frustrating more than anything. I guess this is how it is. I don’t know.”

Unless Kelly figures out a way to incorporate Murray into the offense, a LeSean McCoy sequel could be brewing in Philadelphia.