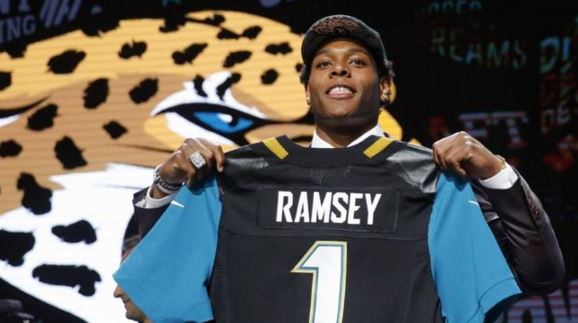 Last season, the Jacksonville Jaguars were absolutely devastated when the No. 3 pick in the 2015 Draft, Dante Fowler Jr., tore his ACL during the first practice of the season. Flash forward to this year, and the Jaguars’ first-round selection has once again gone down with an injury.

Jalen Ramsey, the fifth overall selection from Florida State University, suffered a small tear in his right meniscus. While the injury isn’t believed to be as serious as the one Fowler suffered last offseason, there is a legitimate possibility that Ramsey won’t be ready for the start of the 2016 season.

Sources have reported that Ramsey essentially has two options regarding surgery. The specifics of each haven’t been announced, but one procedure would take 4-6 weeks to rehab, while the other would take 4-6 months. In the meantime, Ramsey is waiting to get a second opinion from Dr. James Andrews before any decision is made.

Although Ramsey should have no problem returning to the field at some point this season, the injury still comes as extremely disappointing news. After the offense led by quarterback Blake Bortles exploded onto the scene last season, Jacksonville was hoping a similar improvement by the defense could result in the Jaguars’ first-ever AFC South title (they won the AFC Central division in 1998 and 1999).

There’s no denying Jacksonville’s immense defensive potential, but the foundation of Fowler, Ramsey and second-round pick Myles Jack is now littered with injury concerns. Jack slid to the second round of this year’s draft due to concerns regarding the meniscus he tore in September, Fowler has yet to play a down in the NFL and Ramsey’s right knee injury is the second one of his football career.

Jacksonville has a roster talented enough to compete against the best of the best, but until that talent figures out how to stay on the field, the Jaguars are well on their way to losing the AFC South title for the 15th consecutive season.